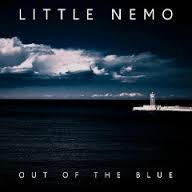 Out Of The Blue

To be honest, I don’t think a title like Out Of The Blue could be better chosen for this album as totally unexpected the masters of touching pop, Little Nemo, are here again. Okay, they have something to celebrate as it has been 20 years ago since they started their excellent popproject. The sole difference between now and then is that leadsinger and maincomposer Olivier Champeau isn’t any longer involved.

Out Of The Blue is once again a collection of brilliant popgems. Opener Diskover is a bit of a strange choice. Nothing wrong with the track itself, but for a moment you think that this Parisian band have turned out to be the new Death In June, but that’s only for 3 minutes. As soon as Last Sunset starts you know that Little Nemo sounds again like… well, Little Nemo. They surely haven't forgotten how to write a proper synthpoptune, and as in the old times they also add those dark synthetic sounds to their music.

In Starship you hear the same excellent synthsounds that made a track like City Lights such a classic. Just like they always do, they once included a French classic "chanson" (that probably will never become one just because people are just too blind), but Le Dormeur Du Val is a genius track that reminded me of A Une Passante. This time I have no shame to admit that I hear some Etienne Daho in this, as according to Little Nemo the French star is a big fan from the band himself.

By the way, soon you can read the ultimate Little Nemo-interview on these pages. In the meantime you can embrace Out Of The Blue. Okay, I’m a fan, so this is not objective...but I still keep on saying that they're probably the most underrated band in this universe, the ultimate popband you might never heard.

Touching pop is not dead…it still sounds like it’s 1986, but with that attitude they succeed in making one of the most essential albums of 2013.

Other reviews from LITTLE NEMO
LITTLE NEMO • Past And Future