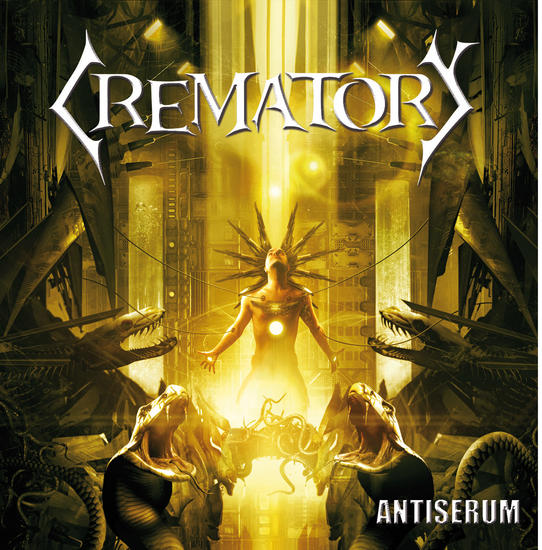 Crematory no longer need to fear comparison with the international competition, Germany’s most popular Gothic Metal Band having earned itself an excellent reputation at home and abroad over the past 23 years. One reason for this is the great recognition value of their songs, along with the band’s characteristic style and their unconditional determination to continue to grow as artists. None of their albums so far is a copy of any of its predecessors; each of them is an independent recording with unique features and fresh ideas. So if Crematory has decided to pick up the electronic elements from Revolution (2004) on their latest album Antiserum, they do so with different parameters and future-oriented visions. So far the promotional talk, let’s start talking about the album!

To start with the cover, the images and the fine fantasy art! I just love it! Before I start the real review I must say that I really loved listening to it, it was sometimes hard to focus on the reviewing part as the music was taking me away from my keyboard!

'Apocalyptic Vision' is a nice intro that unveils the story of the album! 'Until the end' has a nice melodic sound and a great mix between the brutal grunting (Matthias) and the clean/melancholic voice (Felix). Love the electronics in it too! The guitars blend in well with the melodic sound! 'Shadowmaker' has a fast & energetic drive, love the mix between electronics and the typical gothic metal sound, the mix of the clean and the brutal voice! The metallic computer voice is also a nice ad, giving it an extra dimension! 'If you believe' is partially sung in German (harsh voice) and English (clean voice), it sounds a bit like Rammstein on heavy fuel. One thing is for sure: the 2 languages are blending in perfectly and I love the melodic sound! 'Inside your eyes' has a more death metal-minded sound until the clean voice gives it a more melancholic & desperate sound! 'Kommt näher' sounds as if I have heard it before! Love the melody & the well worked out sound. The chorus is despite the fact that it is in German very catchy (my German is not good enough to understand it fully)! 'Irony of fate' is yet again a great mix between electronics & a great melodic metal sound & also a great mix between a clean voice and a harsh and brutal voice. I love the lyrics & the catchy chorus! 'Virus' sounds a bit like Rammstein, for sure in the beginning when the harsh voice is singing. The backing lifts up the song to a higher level. Love the synth that plays an important role in this song. 'Back from the dead' starts like a symphonic metal song and gets more pumped up by the backing and more electronics. This one must be a bomb on stage! 'Welcome' starts all fired up & becomes more symphonic after 30 seconds. This one sounds like a perfect opener of closing song for a concert! Love the high tempo & the chorus! 'Antiserum' starts with a piano synth and gets lead by Matthias before the great voice of Alex also jumps in. This song gives back the hope and is a great end song! Love the melodic and melancholic sound in it!

I hope to see these guys back on stage, as their passage at Eurorock and Graspop is way too long for me ago for me! I really enjoyed their album! It was hard starting the next review as it's the kind of pearl that stick on you and makes all the rest sound like rubbish! Great work!

The people who buy the digipack version get 2 extra tracks:

Other reviews from CREMATORY
CREMATORY • Monument