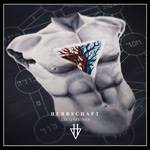 I already reviewed one single from them and was amazed. Three bands came to mind : Alien Vampires, Rammstein and Marilyn Manson. After listening I can even give more names: Freakangel for example! This band could have been signed by DWA, just listen to it and you'll see why! I love the production and the fine mixing! Great studio work!

They gave themselves a German name, the title of this cd is French and somewhere in between lies their sound. Nice thing is that each song has so much variation that you never get bored of it: electro, Industrial, death metal, grinding, singing, melancholic, melodic, aggressive, great female chorus & backings...

I love the female voice on Whispering Clouds for example. The single Rat in cage (read my review here) is great. Gates to dream is a great adrenaline driven song with some nice electro and industrial parts. Kim Ga Yo is a crazy title and what an adrenaline shot it is! Allmighty has even a passage in which one really sings (and another one screams like as if it was Freakangel doing it). Thirty-six has a nice electro gripp, mixed with a nice synth, a harsh voice, metallic guitars and drums and a really great vibe! Bloodpulse is another great one, but in fact all songs are great so don't mind listening to the other pearls!

This is simply finger licking, headbanging, jumping up and down, and making your hair whirl the wind, fingers in the air...

WARNING: don't drive whilst listening to this one, the pumping adrenaline shot is far too dangerous and you might be a danger for others!

and here's the interview: