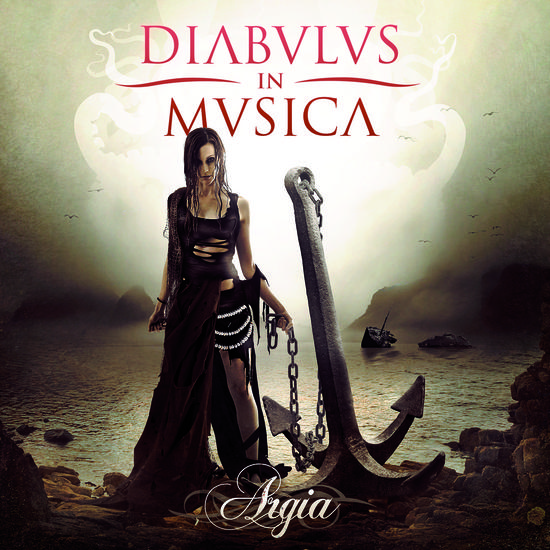 The Spanish masters of Symphonic Metal finally release their eagerly awaited third album "Argia". The fantastic female vocalist Zuberoa Aznárez and her band members masterfully combine heavy Metal riffs, a pounding rhythm section with passionate and symphonic elements. The compositions are crowned by wonderful refrains, which will grab the listener’s attention at the first spin of the record. "Argia" is a testament to DIABULIS IN MUSICA’s extraordinary ability to merge metallic heaviness with symphonic catchiness.

So much for the well written promo talk & I must say I totally agree with it! From the first song you are drifting away from the real world, sucked into theirs, with the soft voice, medieval instruments... The influences of this first song goes from Qntl, Dead Can Dance, Medieval Babes & Helium Volia... The massive choir on the opening track is simply astonishing. 'From The Embers' is exploding and a rude awakening from a soft dream! The pathos is kicking you into the fire of raging guitars and bombing drums. The male grunting gives it another touch, more evil minded... The symphonic metal is getting to a first high! 'Inner Force' is an almost typical melodic metal track, great fireworks within this song! 'Furia de Libertad' is sung in Spanish and here I feel a bit of sound like in 'Hijo de la Luna', maybe it's the extra voice of Alyn Giménez? I also love the male choir and the great choir when they join and jump in! This song is simply a vocal pearl! I'm pretty sure that even non-Spanish speakers will love this melodic pearl! 'Maitagarri' is on the same level and also sung in Spanish. The start is one of a soft ballad. After a while the words are sung in English. When I hear the verse' Take my hand' is got a short feeling off: I have heard this one before, for sure with the weeping sound. Somehow the vocals sound like Breath of Life (Isabelle Dekeyser), but that is a great thing! 'Sed Diabolus' is a heavenly interlude, where the sweetness takes you away, deeper into dreamland! And then suddenly the outburst comes and 'Spoilt Vampire' starts. The choir is pretty impressive, just as the guitars and drums! Once again I think of Isabelle Dekeyser and then deep grunting changes the mood. A nice example on how to play out the beauty and the beast in a song! The drama in this song is close to what we get from the greatest classic in this genre! The fire within this song is so much burning that you have to cool down after this song! Love the pathos! 'Eternal Breeze' comes just in time and makes us soft and peaceful! Love the piano and the soft symphonic components, lifting the dramatic attitude without getting over the top. Somehow it feels like as if they made a shot at the Eurovision song contest with this one and maybe they can even win with it? Love the solo and the break in the end! Great pathos! Somehow my head starts to move without me noticing it on this song. Maybe, this might be the future path for a band like Breath of life? Anyway: I loved it! 'Mechanical Ethos' drowns us into the metal hardcore with even some industrial influences whilst the drummer throws in all his power. At some point the choir makes me think about a bridge to the great Carmina Burana'. 'Encounter at Chronos' Maze( feat. Thomas Vikström) gets an contra tenor fighting against a tenor/soprano. The drama in this song is well worked out, just as the symphonic melody! Great studio work! 'Indigo' starts like a romantic ballad, a harp and a flute. More and more the songs feels like fitting into The Lords of The Ring movie (or other and similar movies). To me it's a real masterpiece! 'Healing' wakes us out of our nice dream with a pure metal sound, a great soprano and hammering guitars. The orchestral sound is a bit more mixed into the background, whilst the massive chorus gets more up fronted. Around 4:15 the song gets a bit of a resting point with a medieval piano before a more opera minded score bursts out and wakes up the orchestral part. The more dramatic vibe wins in the end. 'Horizons' is a nice outro, with a little Japanese twist in it!

Well, this one was absolutely brilliant, again a great discovery! I would love to see them in action! I enjoyed this well-crafted diamond! Thank you for sending this music into my life!