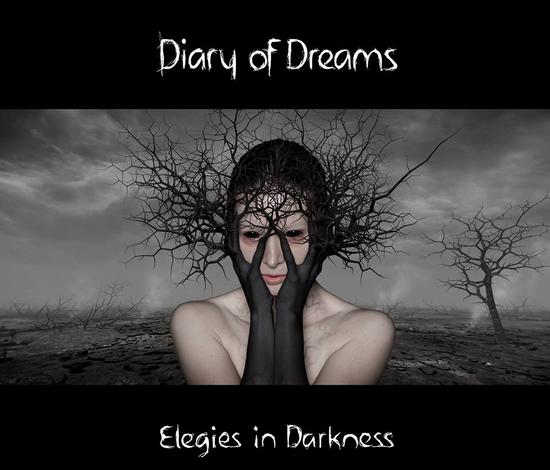 Diary of Dreams produces on regular base new material and each time with a certain theme. This time it's Darkness. The sound is not revolutionary compared to the previous one, but its pure quality! We get enough typical stuff from electronic and guitar driven songs to pure ballads, in the end all the fans must be satisfied! I must say that in overall the sound is much richer and has been more worked out. As for me this is simply the best elaborated cd of Diary of Dreams!

'Malum' explodes pretty fast with aggressive synth & guitars. The bombastic sound gives it a higher level, just as the vocal rage of Adrien Hates. The small break downs keep the song interesting. This one must be a real killer song during a concert! 'The Luxury of Insanity' has a nice acoustic start, slowly blooming and changing into the typical electro gothic sound of Diary of Dreams. 'StummKult' is a German song, sadly my German is not well enough to understand it all, nut I love the dark sound. The song is a bit slow, but the sound is good and I’m pretty sure that Germans will love the narrative side of this song. 'Dogs of War' is a melancholic slow one and not at all the aggressive dance floor attack as expected when reading the title. I simply love the melancholia in this one, taking me down! 'A day in December' starts as a piano ballad, with 2 voices backing each other. The song feels like a weeping song, driven on pure melancholia and depressive voices! The guitars are well mixed in the back! 'A dark embrace' is a typical old school Diary of Dreams song (but with a more elaborated and more worked out sound with more details in it). 'The Game' gets again the kind of a dual vocal support, real drums and a bombastic sound making the song explode like as if it was a volcano. I would call this song a melancholic rager! 'Dream of a Ghost' is a false slow one with great a piano, some synths and the typical melancholic voice of Adrian Hates. 'Daemon' starts with a piano and gets pumping beats and up worked synths before cooling down a bit. Once the voice comes in the bombastic sound changes the style of the song. The melancholia stays. The break take down the rhythm of the song, but makes it a bit more danger-liked song. Same can be said from 'House of Odds' & 'The Battle'. 'Die Gassen der Stadt' is a great ballad, like only Diary of Dreams can produce them! A great end for the regular cd!

'Mythology of Violence' is a false slow one with nice electronics and a bit of the typical bombastic sound and a great melancholic voice!
'An empty house' is a typical Diary of Dreams song, with known electronics and guitars and the typical voice and dramatic vibe. I think that the lyrics might be appealing for some situations, just don't commit suicide after listening to this song if you are in the situation described in the song. Search for help if needed!
'Remedy mine' is a great piano driven ballad, until the electronics and the guitars jump in. The bombastic and melancholia takes it over, coming in like in waves.