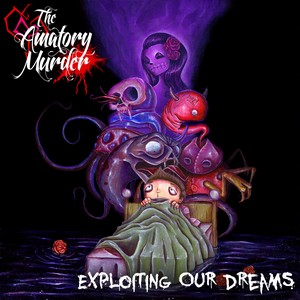 The New York based band The Amatory Murder reminds a lot of The Birthday Massacre. Not only musically, but even the lay-out reminds of the Canadians. The music is best described as (very) catchy industrial synth rock. The biggest difference between the bands is that this time the singing is done by a man (Christian Peppas). Besides to this fact is that The Amatory Murder dares to experiment more on this EP. Different songs are successfully mixed during the second part of the album. The guitars are gone, but are perfectly replaced by synths and heavy beats. They are great supplemental of the original songs. “Exploiting Our Dream” sounds modern, nice and heavy enough to impress a wide audience. Most striking is the great voice of the singer, but also the interesting, almost progressive rock approach of ‘King Of Pain’ (originally from The Police) sounds superb. The Amatory Murder sounds professional without losing any feeling. The production sounds fantastic and the songs are very catchy. Listen for instance to opener ’A Haunting’, the inventiveness of ’Need’. the semi-ballad ’Eleanor’ with excellent guitar work or the catchy ’Perverted News’ (with again great guitar work).