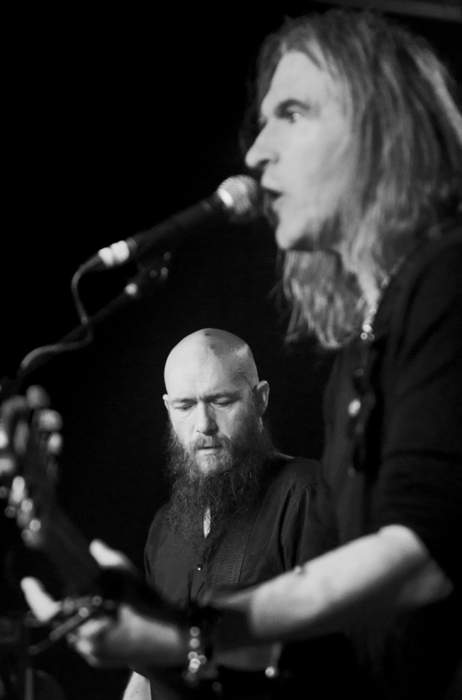 Friday 30 september saw the fresh start of British cultband New Model Army's new European tour in the sold-out concert venue Muziekgieterij in Maastricht, Holland. Definitely a cracker for the normally smaller amount of Belgian and more numerous Dutch fans of the band that just released its fourteenth studio album named Winter. Remarkable is that this album is accompanied by a graphic novel from Australian illustrator Matt Huynh describing some of the songs.

After their blitz visit at Lokerse Feesten two years ago - forty minutes and as the second band was a little... eh... little - this gig was an excellent opportunity to see New Model Army in its full glory again. And after 36 years the band doesn't necessarily need to prove anything. In Belgium they didn’t really ever get them, there were also few attempts to because these Britons were never 'fashionable'. Once they had put New Model Army, shortly NMA, in a musical box they were already in another one. Maybe that lead to a vacuum in terms of market positioning but otherwise one can speak of rich musical influences on their records. But if there's one place where Justin Sullivan most probably does like to stay, then at a camp fire, the breeding-place of singer-songwriters. If he doesn't take out his acoustic guitar there, well... then at least some of his inspiration. Luckily this hasn't lead to boy scout situations as the fire burns too strong. Besides that it was always New Model Army's rhythm section that got them out of mediocrity. Now their new bass player since april 2012 and occasional percussionist Ceri Monger has been with the band a bit longer there was nothing in the way of the Bradford five from going full speed, the watermark for their entire live career. Young talent Monger brings in a whole new vibe which could already be heard on the fine album Between Dog And Wolf (2013), their most successful in twenty years, and this vibe continues on the new record as well as live.

Steamy as always NMA began their set, this time with a guitar roaring that defied like an engine at high rotational speed ready for burnout or to wreck the place playing 'Burn The Castle Down'. Which they did! After this biting rocker in good tradition, the 7" single 'Winter' from the same named album came warming the hearts of the audience now winter months are arriving. A great song with the familiar ingredients, an acoustic guitar and a gently compelling bass line, that kept the drive going. "Yes I fear the age of consequence", Sullivan knows what goes on in the world and he is really concerned. With good reason, we'll hear that somewhat later on 'Part The Waters' too. In the year 2016 the bass maybe defines less prominently the sound than it used to but Monger chooses elegantly his moments in function of the song. Classic rock has already been said, but that's just another box for the bag. Out of the bag with the older songs then came 'Space' from the underestimated album Impurity. It's a tune that has not been played often for public but it just makes you feel floating out there, this airy composition. The first intermezzo from the past was followed again by two new songs. 'Part The Waters' and 'Eyes Get Used To The Darkness' can be considered a little bit more oldskool NMA, if that exists, but the experiments on previous records have obviously been taken with them in their overall luggage. Sullivan strongly empathizes with the refugees' experiences, he was never shy from any (nature) symbolism but he also remains the eternal rock-mantic. He is the high priest that shouts about penance and deliverance but not necessarily for himself. At his altar however he's always been surrounded well. Maybe that's why he was never scared of his destiny, which we heard again in 'Fate', another one from the beginning of the nineties. From there it's a only a small step to the devil. 'Devil' tells a story that's been repeating itself for thousands of years. Sadly live there weren’t the images out of Murnau’s silent movie to accompany this single but the performance came over a bit pale, in spite of the 'hellish' bass drums. The lead guitar lacked in power and the song was not received all too enthusiastically. At social media there were some mixed reactions about it and some think ‘Devil’ sounds too much like the 90's. Maybe the chorus seems a bit simple but often you need to absorb a song or record of NMA for a while. Whereupon in reaction 'Angry Planet' undeniably had more than enough venom to kick Bono in the peace butt with a nailed clog. The metal side of the English also brought them on Wacken last year where this song was one of the highlights of their set. The anger, often the cause, now soberly seen as a matter-of-fact. Thereafter again three songs from the new record emerged. 'Drifts' was intriguing and brought up the harmonica, 'Born Feral' leaned on the double percussion of Michael Dean and Ceri Monger, the reminiscing lyrics and a collective primal scream. But it was mainly with 'Die Trying' that the spark spreaded and lit the hearts of the crowd once more. This unpretentious ballad about the suffering of refugees may become a new classic according to the band's norm. And more clouds darkened the world when a thundery guitar riff, rousing tribal drums and threatening keyboards met each other. 'Stormclouds' is just a wonderful song that races like a bulldozer on rolling barrels of dynamite. "Bring it on!"

Gotta get off the island

With the death of Ashley Cartwright the weekend before, Sullivan lost a friend and inspiration source. No wonder that the NMA-anthem '51st State' was dedicated to him, he actually wrote it. A lot of fans went wild for themselves and for Ashley, a party he probably would have loved. On their records you don't always know what to expect from New Model Army and that's always exciting but live the big turnaround does not apply for these troubadours of rock. Out of the back catalogue, 'White Coats' still stands firmly though. Not only is the theme enduring actual, the band still plays the song very sharp and clear. Other classics as 'No Rest', 'Christian Militia' or 'The Price' stayed in the UK this time, but the raw melody men still have a big enough collection of outfits hanging in their closet to choose from. Funny also is that the band played 'Autumn', a hippyish song about the beauty of decay, besides 'Winter'. The creation of the other seasons is doubtful to us, just as the live persuasiveness of 'Autumn'. That Justin Sullivan likes to have a say at a gig, most of us know. While the brexit causes the British island to drift further and further away from the mainland, this does not please every inhabitant. The answer of Sullivan and his mates was a musical and lyrical one: "Gotta get off the island!". Luckily the English are a people of sailors... yeah... sturdy pirates that even raided those present with their final encore 'Poison Street', although just like '51st State' the song sounds somewhat out of date. None the less it was the extra that many already had given hope up for. And why taking up the harmonica again, Marshall Gill, if you can let go loose your guitar like that? But the ultimate high of this gig we experienced minutes before. The buzzy sphere and metallic sounds behind the glockenspiel melody of Dean White announced there was a flash of rock beauty coming our way. ‘Between Dog And Wolf' built up slowly till the rhythms of the guitars finally carried us away in the at times apocalyptic ecstasy of Sullivans impressions of the twilight. Great! For those that don't follow New Model Army regularly, we can let you know there has come out a documentary on DVD two years ago, telling the band's story until then and which has also been called 'Between Dog And Wolf'. And then a note to conclude with. "Why do we never play Belgium?" the singer asked himself and the crowd at a certain moment. He has a valid point and we ask ourselves the same. If a Belgian punk-band like The Kids keeps playing all over the country without ever releasing new stuff, then New Model Army definitely could do that as they renew their dynamics at least quite often. They have the thing in common with the Antwerp band that "they always deliver", as the English say it very well. So Belgian concert promoters... if you still want to put straightforward intense rock without diva behavior on your bill, then don't wait another ten years for chances have become bigger you may expect Justin Sullivan with his walking stick and acoustic guitar. Nothing wrong with it in fact. On the other hand for playing in a parochial club you don't need to get NMA off the far island. There's too many stripes on their uniform for that!

Gotta get off the island!