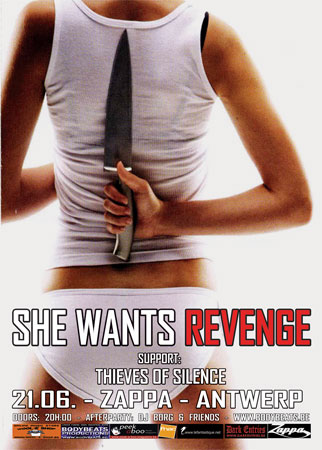 Oddly enough: it was the first concert of She Wants Revenge in Belgium since the creation of the band in 2006! Bodybeats was very proud to organize the concert at the wonderful venue the Zappa in Antwerp. This American band from the San Fernando valley has been rather successful, especially in the US, by merging post-punk with indie rock, darkwave and even touches of hip-hop, a combination that the band labels as "Dancy rock'n roll". We were really looking forward to finding out what their show would be like.

In an interview with Peek-a-boo, Justin Warfield, the singer and one of the two founders with Adam 12" Bravin, had told us that they would play older material with a few rarities and new songs from the last album "Valleyheart" thrown in.

When the lights dimmed, She Wants Revenge took the stage with "Red Flags and Long Nights", the opening song of their first album, and one of their best classics. It really set the tone for an intimate but very edgy performance.

On stage, Justin Warfield is clearly the focus point. He is tall and impressive with some attitudes that remind us of Prince, one of his heroes. On his right, Adam Bravin, on bass guitar and keyboards, is very discrete. On his left, Thomas Fraggott is playing guitars and behind him, Jason Payne, the excellent drummer who's recently been touring with Nitzer Ebb, has replaced Scott Ellis, the original drummer, who is now a music manager.

The first part of the show included two additional songs from the first album ("Sister" and "These Things"), one from the second album ("True Romance") and three from the last album: "Reasons", "Little Stars" and most of all "Take The World", their latest single: check this last song here on video.

In general, the band seems to be 100% concentrated on the music and the quality of the performance. The sound is perfect and the live drums from Jason Payne bring a real added value in comparison with drum machines.

The second part of the concert was dedicated to songs that are not so well known and even some rarities, like "Sleep", from the "Save Your Soul" EP (2008). The audience seemed less enthusiastic during this part of the show and when the band eventually left the stage, we were badly in need of some stronger vibrations.

Fortunately, the band chose to play their strongest songs during the encore. After the instrumental "Disconnect", they played "Written In Blood", and most of all "Out Of Control" and "Tear You Apart".

Here, She Wants Revenge showed its harder side: drum beats got heavier and the bass plowed through the venue. During "Out Of Control", Justin Warfield dropped his guitar and the audience followed along with his swaying and fluid dance moves. The band’s rock/post-punk influences shone through with clear references to Bauhaus, Cure, Psychedelic Furs and of course Bowie. They ended with a bang, leaving the audience wanting more. In a nutshell, a nice concert, of a high quality but lacking raw energy at certain moments.

Before She Wants Revenge, the Belgian band Thieves Of Silence gave a very convincing show. Those young guys made a lot of progress since we last saw them. The most obvious references in their music are Joy Division and Editors but little by little they are building their own signature. A few things still need to be improved, like, for instance, the communication with the audience. Sometimes it is also difficult to hear the vocals and to understand the lyrics. But the new songs they played sounded excellent and their presence is getting stronger with every concert. It's nice to see that there is a new generation ready to take over! Keep the good work, guys!