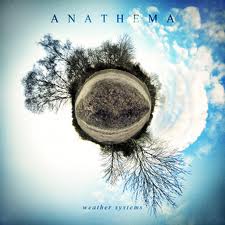 A ray of sunshine...

I must admit I was expecting this new album with some apprehension. "We're Here Because We're Here", Anathema's masterpiece, the best progressive rock album of 2010, had placed the bar so high that it seemed impossible to renew such success, let alone to surpass it. Well, overall, I was not disappointed with this new album from the Cavanagh brothers. "Weather Systems" is perfectly in line with its predecessor. In it, you will find the same bliss, the same fullness, the same light...

To produce their ninth album, the band chose Christer-André Cederberg, a Norwegian, who has had the difficult task of following the Master himself, the 'Wilson King' (Steven Wilson of Porcupine Tree), who had so brilliantly produced "We're Here Because We're Here". The recording sessions took place at the Parr Street studio's in Liverpool, the band's native city, then at the Cederberg studio in Oslo, and finally in a studio in Wales housed in a disused bunker.

The four songs that have formed the basis for the album are "The Gathering of the Clouds", "Lightning Song", "Sunlight" and "The Storm Before The Calm". Composed around 2010, these songs have in common to use the climate as a metaphor to evoke emotions, love, life, death, philosophy... Hence the album title "Weather Systems". Musically, they also have a similar structure, with introductions like, eg, the sound of a thunderstorm, followed by superb riffs in picking performed on acoustic guitar by Daniel Cavanagh. After that, you get the vocal lines, ethereal, riding on clouds of violins or synths, which intertwine in perfect harmony. The whole evolves gradually to a climax where guitars and percussion explode, before giving way to calm and serenity.

Note that "Lightning Song" is sung by Lee Douglas, who here acquires a status of "lead vocalist" next to Vincent and Daniel. "The Storm Before The Calm", a composition of drummer John Douglas, Lee's brother, is a little different with its darker atmosphere. The shadow of Porcupine Tree hovers nearby and this is one of the highlights of the CD. We find ourselves in the eye of the storm and after the storm comes the quiet, with a few guitar notes and soft vocals.

"The Lost Child" comes from a dream of Daniel Cavanagh, who dreamed that an autistic child was singing a haunting melody while swinging in his chair in a mental institution. Upon awakening, Daniel succeeded in remembering the notes and wrote this overwhelming song.

"Internal Landscapes", the last song, sums up the themes of the album by telling the story of a near death experience. The voice of Joe Geraci recounts his travel and his immersion in the middle of a deep light and an indescribable warmth, all this combined with magical soundscapes. Then the song unfolds gently, like a modern "Us And Them".

No doubt: Anathema has achieved another milestone in their career. The melodic structures are deeply beautiful and intensely powerful, while remaining very simple and accessible. They are transporting you to the heart of life, within yourself. It is also a work of polarities. Shadow and light, birth and death, love and fear: these simple emotions of life are all explored here. They are channeled in melodies, harmonies, lyrics, orchestrations and arrangements that are close to perfection. An emotional journey that goes to the essence of life. A ray of sunshine...

Track Listing
1. Untouchable Part 1
2. Untouchable Part 2
3. The Gathering Of The Clouds
4. Lightning Song
5. Sunlight
6. The Storm Before The Calm
7. The Beginning And The End
8. The Lost Child
9. Internal Landscapes