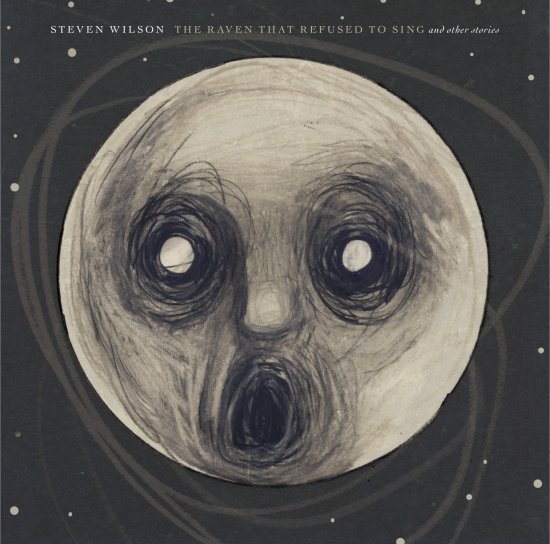 Four years ago, Steven Wilson, founder and mastermind of the English metal/prog band Porcupine Tree, started a solo project in order to give free rein to his creative bulimia, but also to extend his musical reach towards other musical styles like jazz-rock, trip-hop, industrial, dark ambient as well as a much stronger focus on 70's progressive music, especially King Crimson, of which he has remixed all the albums with surround sound. Wilson's first album, "Insurgentes", was a 100% solo endeavor but after the second album, "Grace For Drowning", he decided to form a new band and made a first tour in 2012, during which he played a remarkable concert at the AB in Brussels. His third album, "The Raven That Refused To Sing (And Other Stories)", was engineered by Mr Alan Parsons in person and marked Wilson's first attempt in his solo career to compose and record music for a full band: frankly, a true success!

It is therefore with great curiosity that we were expecting this concert, given in the beautiful Arenberg hall in Antwerp. After an introduction with ambient music and a video featuring the last album's moon artwork, already helping to create a dark and mysterious atmosphere, the band took the stage. It is composed of German powerhouse drummer Marco Minnemann, former Kajagoogoo bass/stick player Nick Beggs (he also played with Steve Hackett), keyboardist Adam Holzman (who played with Miles Davis!), flautist / saxophonist / clarinetist Theo Travis and a new guitarist, Guthrie Govan. With the first song, "Luminol", the sounds are downright jazz-prog and we are plunged back 30 or 40 years ago, in the times of King Crimson, Pink Floyd, Yes, Rush, Todd Rundgren/Utopia and other Van der Graaf Generator. Barefoot as usual on stage, Steven Wilson stands with his guitar in the middle of his new super-group like a conductor, highlighting the major impulses and stimulating musicians. The first song is a tour de force mixing different styles and atmospheres with amazing mastery.

Before the second song, Wilson welcomed everybody and said he had feared to play in an empty hall because of the snow! He sits down with his Ovation acoustic guitar and it's "Drive Home", from "The Raven...", with its beautiful intro à la Camel. The song is a soft ballad reminiscent of Genesis but when the break comes, the jazzy guitar and the clarinet made me think of Sting and Branford Marsalis, followed by a fantastic guitar solo by Guthrie Govan, who has a very fluid style, a bit like Alan Holdsworth, UK's legendary guitarist.

After "The Pin Drop" (which sounds very Anathema) and "Postcard" ("a proof that I can also compose conventional songs of less than 5 minutes"), it's time for the first major highlight of the evening, "Holy Drinker", another new song, which is welcomed with cheers by the public. It's another progressive masterpiece with strong guitars, different sequences including an incredible chorus with psychedelic minor chords played on mellotron and a tragic ending with dark drones and guitar licks: a great moment. Then, it's time for Adam Holzman to play the wonderful solo piano introduction of "Deform To Form A Star", from "Grace For Drowning": you feel shivers down your spine as this beautiful song unfolds like a King Crimson forgotten jewel.

At this moment, a transparent curtain comes down between the stage and the audience and a video with the face of an old man is projected: it's "Watchmaker". Acoustic guitar arpeggio's reminding us of early Genesis lead us into this soulful composition, which develops into a jazzy improvisation and ends in a prog frenzy à la Yes. The curtain will only disappear after the next song, "Index". Then follow two relatively calm songs from the first album, the soft "Insurgentes" and the beautiful "Harmony Korine", a song named after a famous American Director that Wilson describes as "twisted"... The public shows enthusiasm, and not without reason. This a very accomplished, nearly 'mainstream' song: a guitar intro à la U2 and a melody reminiscent of "Exit Music For A Film" by Radiohead, but with Wilson's indelible trademark. Here, as it is often the case, the live version is much 'harsher' than the studio version.

After the touching "No Part of Me", Wilson urges his musicians to "explore and fill every space in the hall with their jazzy, though not too jazzy improvisations".... and it's "Raider II", probably the most ambitious song he ever wrote. A musical kaleidoscope devoted to the American serial killer Dennis Lynn Rader (BTK for "Bind Torture Kill"). Some very low notes on the piano, horror noises played in quadraphony in the room: the atmosphere is dark as hell and you can hear a pin drop... Awesome. Then the song unfolds for 20 minutes in a succession of moods ranging from jazz, heavy metal, prog, doom and dark ambient, ending in a staggering noisy explosion, on stage and, right after, in the public.

In stark contrast, the last song of the set is the soft title song of the last album: "The Raven That Refused To Sing..". Wilson said in an interview that it's probably the most beautiful song he ever composed and I'm tempted to agree with him. During the song, an animated film depicts the heart-breaking story of an old man who lost his little sister when they both were young (see video below). The atmosphere in the hall is simply magic and during the final piano notes, everyone jumps from their seat for a standing ovation that will last more than 5 minutes.

During the encore, WIlson's band didn't play the cover of the old Porcupine Tree song "Radioactive Toy" like in the previous shows of the tour, but a nice medley of two Wilson's songs: "The Remainder of The Dog" and "No
Twilight Within The Court Of The Sun". Here again, all avatars of prog-rock are revisited by the hand of the Master. The hypnotic piano intro is reminiscent of "Carousel" of Happy The Man and the guitars, of "Voyage of The Acolyte" of Steve Hackett, who by the way played on the studio recording of "The Remainder...".

In drawing conclusions after this fantastic concert (it was even more than a concert, it was an audiovisual journey), it is clear that Wilson has formed around him a very strong band of virtuoso's, presenting an amazing range of musical styles. Wilson said in an interview that it will probably take at least one or two years before he might consider reforming Porcupine Tree but I have to say that it no longer matters to me. This new band and Wilson's magnificent compositions have marked a stunning evolution both musically and lyrically. It's not only progressive, it's also 'progressing'... The 'King Wilson' will continue to be one of the most influential artist on the rock scene for a long time and that's what matters after all... In an interview, Wilson said: "I am winning that battle, but it's hard, and I'm constantly reminding people that this is not a side project; it's the most important thing I've ever done."

Setlist:
Raven Artwork Video
Luminol
Drive Home
The Pin Drop
Postcard
The Holy Drinker
Deform to Form a Star
Watchmaker Intro Video
The Watchmaker
Index
Insurgentes
Harmony Korine
No Part of Me
Raider II
The Raven That Refused to Sing
Encore:
Medley with Remainder of The Black Dog and No Twilight Within The Court Of The Sun