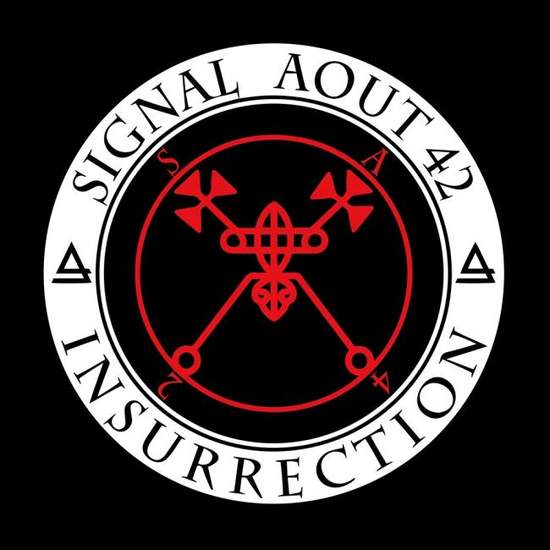 The Belgian EBM legend returns after a six-year hiatus, Signal Aout 42 have erupted back onto the scene with a brand new long-player Insurrection. Following on from 2013’s ‘Inspiration’, the defiant energy is very much intact and continues within the groundbreaking spectrum of electronic revolution.

The energy of Jacky Meurisse is relentless, still shining strongly almost thirty-eight years since the foundations of Signal Aout 42 were set. When school friends Jacky, Damien and Luc Vandamme came together with a love of beats and a drive to push forward. Forging a style which in its very essence was revolutionary in the cause of EBM and new beats.

On Insurrection we are presented with twelve brand new tracks designed with a behemoth sound. From the outset, the fire starting begins with -“Under Pressure”, setting the tone and themes of what is to come. A kaleidoscope of sounds erupts deeper into the album with the collision of “Welcome To Reality” and “Out Of Control”. As albums go, Insurrection is an adventure more so than a standard conceptual body of work. The broad scope of ideas by Meurisse is breathtaking at times, the seamless flow of tracks is inspired as is the title track and “No Apologies”, bass driving, eerie and all times original.

This is a mammoth release and one which is deserving of the colored vinyl, double lp edition which is mouthwatering to say the very least. Regardless of the chosen format this album is stunning and one which demands repeated plays to discover more hidden treasures.