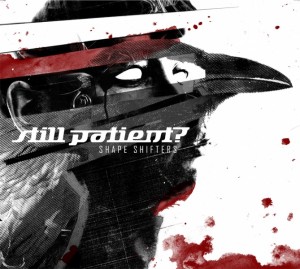 When in 1999 the German goth rock band Still Patient? decided to stop, no one ever thought that the band would ever return. Well, you’re wrong! Three years ago, the group that was once one of the goth bands you had to follow on Hyperium Records, tried to conquer the scene again. Some new members were added and now, with the sixth album Shape Shifter, the foursome from Worms wants to show that it is back!

Seconds Of Frame immediately makes shows that those years of absence are not a problem. The song deliciously sounds old-fashioned in the best sense of the word: this is solid goth rock, a little bit heavy, but with an irresistible melody, so that you start playing air guitar in your living room without noticing.

Swallowed goes in the same direction, although the text is about what can happen when you are desperately in love. Believe In Angels is probably the one that can be important in alternative clubs. From the beginning the chorus settles in your head and you can float away on the beautiful sound carpet that is created by the synths of Andy Koa and Guido’s bass sound. Believe In Angels indeed sounds like ultimate goth rock is supposed to sound!

The title track Shape Shifters is powerful psychedelic pop, while We Come In Peace is a sing-along song (well, kind of) that sounds a tad like Laibach. Red River sounds irresistible, the almost magical riff perfectly demonstrates why someone invented the repeat button. The icing on the cake is undoubtedly Away From Me, as this is the kind of goth music that you always found on the best albums by The Mission, or in other words: essential beauty! The Devils Bride is the heaviest song on the album, with a sound that is somewhat like The Fields Of The Nephilim.

A strong album has to end in beauty, and a better ending than Song Of Defeat is almost impossible. As a bonus we hear a reworked version of Mascara Osiris, that previously appeared on the compilation Salamand & Cataclysm. No, you won’t find new sounds here, but in all honestly, that would be the last thing we want!