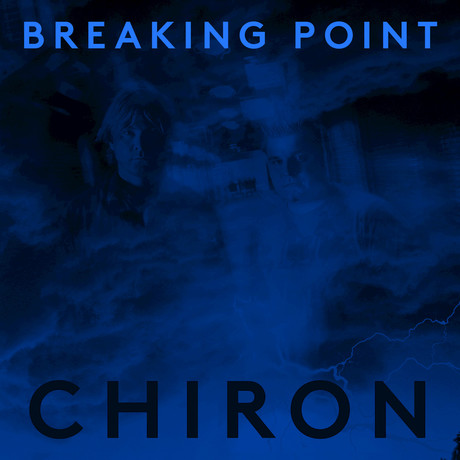 Over here, Chiron is still quite unknown, and that’s a true shame as this Australian band features the top musician Michael Aliani who used to be in the first line up of the famous dark wave band Ikon. From 1997 on, Michael searched his own way through the underground until he crossed the path of the DJ/producer Anthony with whom he started Chiron. The big difference with his former band is that Chiron can’t be tied to one style, as Chiron is in fact more like a mixture of everything that is dark.

Chiron released quite a lot last years, but let us start with Breaking Point, an EP that features four tracks.

The first song nearly lasts ten minutes. The intro has a sort of Pink Floyd feel, the band prepares you for what will come next, but you have no idea what it’ll be. Electronic drums are added, some beats are coming in and it quickly develops into a song that balances between rough industrial and danceable future pop. The kind of track that makes you dance, but it also puts you in a melancholy mood.

Deeper is dark electro and in some way reminiscent of what Dirk Ivens does with Dive. Harsh, melodic beats, combined with an addictive melody. The female vocals in the background give it a nasty touch, well that’s what you get when you compose a song with the main line I wanna get deep inside of you.

Breaking Point is another song that makes you swing. Well, it would fit perfectly on the dance floor, but you can enjoy it in your living room as well. So pump up the volume, annoy your neighbours and dance till you drop. A perfect way to leave this vale of tears.

The final track Free Spin is again future pop. The beats make us think of the good old VNV Nation, and yes that is actually a complement.

Oh, you want a conclusion? Just play it and you’ll get sucked in the synthetic magic of Chiron. We almost wrote essential, because we are addicted indeed!

Next reviews
PARRALOX FT FRANCINE • Crying On The Dancefloor
DAVID BOWIE • Black Star
THE LOVED DRONES • Good Luck Universe:
MANTUS • Refugium
TACOCAT • Lost Time
CAWATANA • Decline Of Privileges
THE 1975 • I Like It When You Sleep, For You Are So Beautiful Yet So Unaware Of It
GREG LAKE • Remastered: Greg Lake (1981) en Manoeuvres (1983)
NIGHTMEN • Fifteen Minutes of Pain
BRIAN ENO • The Ship