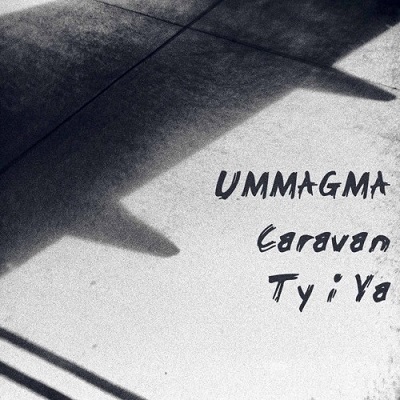 Caravan -Backed With Ty i Ya

It has been a gap of seven years since the last UMMAGMA album release.The husband and wife team of Alexander Kretov and Shauna McLarnon are about to let loose a spectacular tour de force of their own unique blend of folk-tinged electronica once more. In June of this year their latest long-player, the journey inspired Compass will hit the streets.Preceding this sonic delight is a taster in the form of a single, ‘Caravan’ with a more ethnic sound, but the pumping ‘Ty i Ya' backing it all up. With shades of Wolf Alice, Ladytron and Cocteau Twins are sensed, but only in the form of influence as UMMAGMA are a beast of their own unique creation.

“Caravan is about a personal journey - one that begins in the mind before any borders have even been crossed,'-Shauna McLarnon

Like most releases by the duo, this is a very personal capsule of sound, a travelogue which is recorded and presented to audiences. ‘Caravan’ launches with a rush of drums, colliding with trance-like melody and Celtic-styled tinges. Multi-instrumentalist Kretov builds the perfect playground of dream-pop ambiance for McLarnon to soar above with the elegance of a bird set free. At times the shared vocal brings an added depth and dramatic tension, though the spectrum of well-harvested bleeps are invested in all the right areas. The b-side, ‘Ty i Ya' is a more funk-rooted track, sung in Kretov’s native language of Ukrainian, a splendid groove builds before breaking into a sixties style reflective moment. Enjoyable as ‘Caravan’ and showing another side to the duo’s capabilities, definitely a pointer to what we can expect from Compass.