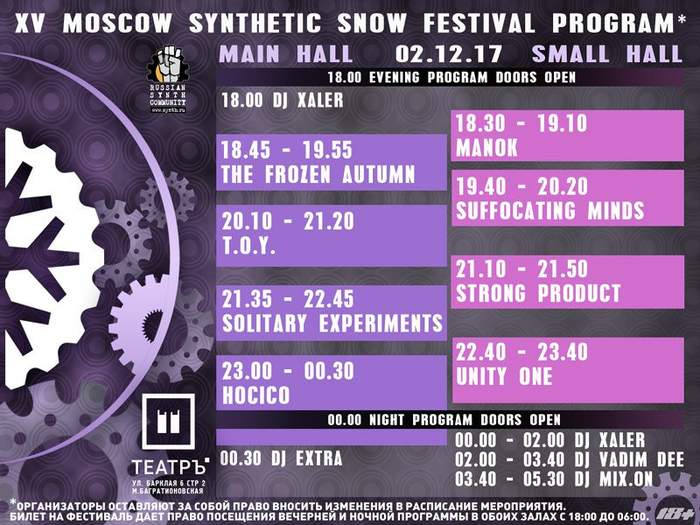 Why do you need some synthetic snow, when you have the real stuff lying around? :) Well, surely because "Synthetic Snow" is THE Russian festival for the synthpop, darkwave and EBM music taking place in December in Moscow: an Eastern mini brother of Amphi. The festival always features a lot of international synthpop acts - VNV Nation, Covenant, Decoded Feedback, Deine Lakaien... the list of the past participants is long and remarkable enough.

This year's edition featured two halls - the big hall with balcony, restaurant and the VIP area, as well as lights and lazer facilities, and a smaller hall on the side. The concerts took place in both performance areas with a little time overlay.

The "Synthetic Snow Festival" started in the small hall with a Ukranian darkwave band MANOK - a dynamic vocal duo and a guitar. The performance was marked by much more goth rock guitar sounds, vibrant and lively rhythms, although it included less electro sound than the other bands performing at the festival. Especially the female vocal was strong and impressive, fully matching together with the male vocalist.

FROZEN AUTUMN opened the show on the main stage with a really professional performance showing directly how to rock and to warm up the audience. Very very melodic and full of power and power itself! The concert was very moving and aesthetic: perfect synchrosination of music, beats, vocals, smooth passages and no useless details. Some songs performed included "Wait for Nothing" and "Is Everything Real?" as well as other hits and classics.

The Belgian trio SUFFOCATING MINDS also presented very high quality synthpop with the "best of" choice of the songs frome their first and second albums. Convincing arrangements, high level live performance, and (the curiosity of the evening) a bass guitar is what they prepared for us. Although they have played between the two headliners on the main stage (Frozen Autumn and T.O.Y) they managed to keep the crowd in the hall and rock until the end. They were even able to give "more" by preforming their signature song "Second Life" the second time.

Meanwhile, on the main stage, the high level standing performance of T.O.Y., much brighter and more electronic than the bands performing before. The vocal of Volker was soft, yet sharp and expertful, the synths - animated and authentic. The thankful audience especially enjoyed "Darkness and the Light" that was also surely one of the culminations of the performance for me, although another songs like "For Gold" or "My Way To You" were performed as well.

STRONG PRODUCT is a Russian oldschool EBM project, with a hint of folky passages and true classical EBM spirit. Well the band deserves recognition for the best dancing and the most self-ironic act during the evening. The audience freaked out! ;) A big like for their funny and naughty lyrics, rebelious character and good... really good music.

SOLITARY EXPERIMENTS made a remarkable and impressive lazer show offering the public a "best of" programme. Giving the possibility to hear your favorite hits, like "Stars" and Epiphany" some other songs have been performed on the way. It was surely one of the numerous band members on the stage offering live drums, two synths and a great singing part in a good futurepop tradition. You could sing along or relax and enjoy the light effects (the best... from the balcony I guess ;)

In the other hall you could discover UNITY ONE - a well established English-singing Russian futurepop project (that has played concerts on national and international levels). For me it was the first time to observe the guys live on stage, it is worth remarking that their dystopic futurepop gig was surely worth watching.

The concert concluded with the full time show of HOCICO. The costumes, the decorations and in general the... made an impressive theatre performance. It was Hocico as we know them - tribal, anarchical, rebelious - all merging in pure energy and creating the new whole out of the primal chaos.

The concerts were followed by electonic disco dancing, picture and autograph sessions. The overall warm festival atmosphere and a direct contact between the public and the artists have compensated for the cold weather outside the venue. 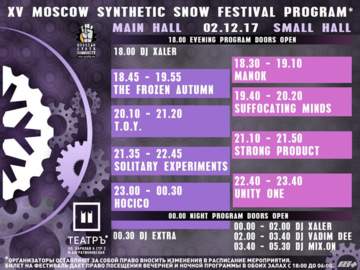 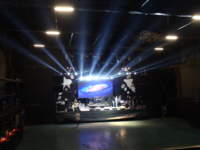