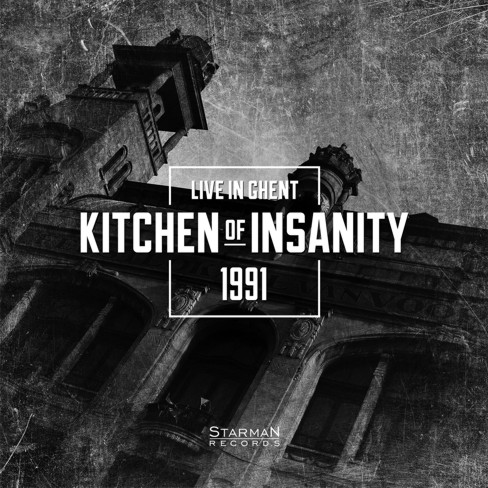 Kitchen of Insanity, Live in Ghent 1991

Kitchen of Insanity was once described as one of the most promising bands from Belgium. In 1990 they played the final of Humo’s Rock Rally, perhaps the most important contest for young bands in Belgium. After finishing second place, they were ready to kick ass, and many gigs in Belgium, Holland and Germany followed.

This live recording is previously unreleased, and is made by Belgian radio in February 1991. The tapes were found in dusty archives, and sound surprisingly good. ‘Live in Ghent’ gives us a nice impression of what this band was capable of in those days, and offers an excellent anthology, including two never recorded covers from The Doors and John Cale.

This band’s style is a mixture of dark-blues, psychedelic and sixties pop, and can be compared with Nick Cave or Scott Walker. The intensive guitar is fitted with the emotional singing, and piano, bass and drum make the most songs to a perfect harmony.

Most tracks have a very big influence from The Doors, tracks like ‘ I m In Trouble’ or ‘Time’ show us why they were called once the country’s most promising band in the early 90’s. Upon hearing these tracks, they are often linked to Jim Morrison, with as highlight the Doors cover ‘Soul Kitchen’. Personal favorites are ‘Ghosts Of Feeling’, a kind of bluesy track with big John Cale influences, and ‘Memories’, a track that reminds me at the early Echo And The Bunnymen sound.

Sadly musical differences, harsh opinions, and a chaotic management made an end to this band. But thanks to Starman Records we now can enjoy one of Belgium’s greatest lost bands again on vinyl