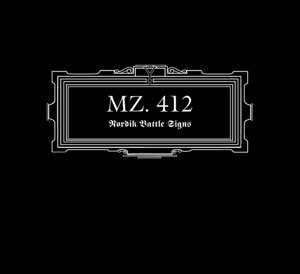 People who adore power-electronics and dark ambient don’t need an introduction to the world of MZ.412 (aka Maschinenzimmer 412) as some state that the man behind this project, Henrik “Nordvargr” Björkk, is the inventor of this genre.

Originally this album has been released in 1999 on Cold Meat Industry but it is now reissued on the British Cold Spring label. To make it an attractive re-release they added four extra tracks, including the already long deleted  “Legion Ultra”-single.

Those who are familiar with the sound from Henrik (who is by the way also the man behind Pouppee Fabrik and Folkstorm) will be aware that this music is quite extreme. This album sounds like a beautiful collage where power electronics, indus and spoken word are melting together.

Difficult music? We think not..

Of course it is quite dark and MZ.412 is real terror for the ears but all by all this release isn’t as hard as  “In nomine dei nostri Satanas Luciferi excelsis” that got released in 1995 and also is being reissued by Cold Spring.

Nice fact for those who like quizzes (if they ever ask such things of course!) : on  the track “Algiz-Konvergenz of life and death” you can hear Ordo Rosarius Equilibrio.