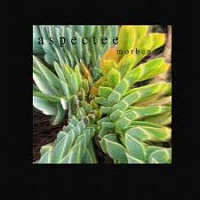 All tracks were made by Michael Frenkel and the CD was issued by First Fallen Star. Aspectee is a side-project of Evoke Scurvee and this is his solo debut. The easiest descriptor would be in the vein of old Cold Meat releases. This is an excellent release but I’ve heard it all before. This album hovers around in the atmosphere of ambient, drone and noise. The tracks have a great cinematic quality, dark deep brooding atmospheres and several orchestral touches.

This beautifully designed digipack, containing images which seem to have escaped from underneath the microscope, all show examples of flowers or other plant life. The biologically inspired artwork is ,oddly enough, also reflected in at least two tracks. When I googled Stuhlmann, I came across a German zoologist who was active in Africa. Dianthus is a species of flowers spread across the globe (including Africa), but other than that I came up empty on the other tracks.