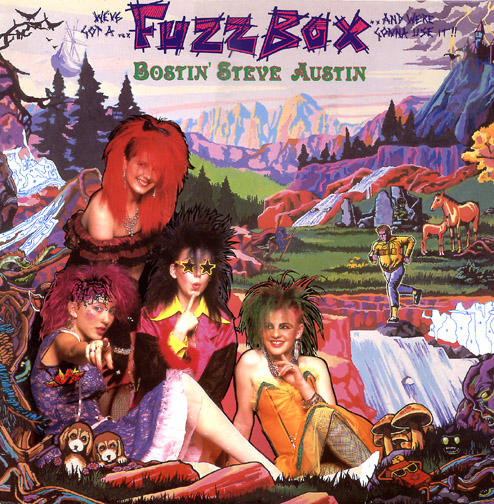 When I was young I stored my Fuzzbox-album among Adam Ant and Bow Wow Wow. Years later nothing has changed (except for the fact that I'm not young) and from time to time I pick up my dusty record to play it loud. Fuzzbox (well in fact, they're called We'Ve Got A Fuzzbox And We're Gonna Use It) have everything you expect from a record.

Those lovely ladies from Birmingham could only play three chords (and I'm sure that technically speaking they even can't play that well) but what did they do with those chords! They were the queens of writing the perfect poptune that lasts three minutes. The four girls were immediately the darlings from Janice Long and (of course!) John Peel. X X Sex even stormed the indiecharts and in no time this quartet were the talk of the weeklies. Bostin' Steve Austin' was released in 1986 and it contained all the hits. Love Is The Slug, Console Me, Rules And Regulations, X X Sex and of course the splendid cover Spirit In The Sky.

Fuzzbox are the creators of candypop. It rocks, it's pure sex and the fuzzbox drills into your body! Now I have my Fuzzbox-cd and I'm going to use it. I know I'm a predictable slut.

God, I want to play this over and over. Now where's my Shampoo-record?

26
09 THIS ETERNAL DECAY
In The Early Days We Spent More Time Drinking And Partying Rather Than Playing
19
09 MORTAR DEVOTIONS
Dystopia Is Just Around The Corner And Orwell Warned Us Already In 1948
16
09 MAT OSMAN (SUEDE)
'I’m always writing short stories...'
15
09 ERASURE
'Music certainly gives us hope' - Erasure talk about their new album 'The Neon'
14
09 WATA (BORIS)
'I will always feel like a rookie...'