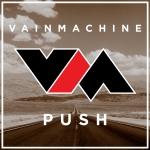 Vain Machine is formed by Beau Baker and Omar Quinones. They are working on their debut album, but while we’re waiting on that, here’s their single Push. The sound of this band from Los Angeles can be described as futurepop that consist of nice bass lines, sweeping pads, lots of synths and electronic percussion.

In September 2014 Vain Machine signed a contract with the UK-based independent electronica label Analogue Trash Records. Push is released as a digital single featuring the original mix of the track and three remixes from Slave Unit, Mykyl Pagan and David Burdick.

Listening to this track, you hear lots of influences from bands like Icon Of Coil or VNV Nation. In my opinion even too much, the song is 'nice', the beats and synth loops danceable, but it misses some identity, This track could easily be on an older Assemblage 23-album. But that doesn't mean that Vain Machine has nothing to offer, I hope they will further develop their own style. Hopefully they can already do it on their full first album in 2015.