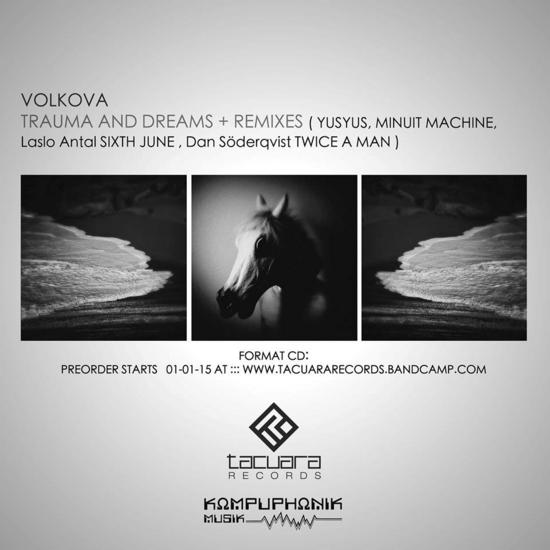 Volkova, the Argentinian minimal synth band from Buenos Aires, re-releases its third album in CD format. ‘Trauma and Dreams’ already has been released on K7, so now César Canali and Paula Lazzarino can also be heard on your CD player.

We don’t get lots of electronic music from Argentina, but this wonderful band makes an exception. This album brings us a perfect travel in the minimal wave scene, with contrasts in all six compositions, a real creative sound experiment. This release also includes remixes of Sixth June, Yus Yus, Minuit Machine and Dan Söderqvist ofrom Twice A Man.

The CD begins with 'The Call', a minimal track with nice analogue beats. The voice of Paula perfectly fits these dark tunes and dreamy melodies, although you cannot overlook her Spanish accent. The title track 'Trauma and Dreams', brings us some spacy experimental sounds, catchy and dark tunes that carry you away into another world. 'Just Drifting' is a perfect minimal piano song, that reminds me a bit of the band 'Berntholer' with 'My suitor'. The 3 other tracks are sung by Cesar, and show a more experimental style, which you can even call postindustrial. ‘Acceptance is defeat’ is a very dark track with scary synths. On ‘No Geography Solution’ the sound of the Peruvian sea is mixed with the deep male voice and lyrics by Cesar Canali.

The remixes really give this CD an extra boost. Minuit Machine, the Paris based synth wave band give 'The Call' a more modern touch, and even make this song danceable. In previously reviews of Volkova, I compared them with Sixth June, the Belgrade synth duo, so no surprise for me that they turn up making a brilliant version of 'Acceptance Is Defeat', dark minimal synth tunes, but in a fresh modern version.

All together this CD is very nice for the minimal wave lovers, it has a very specific experimental and atmospheric style, and it is the joint work of the German Kompuphonik Label and Tacuara Records Argentina.