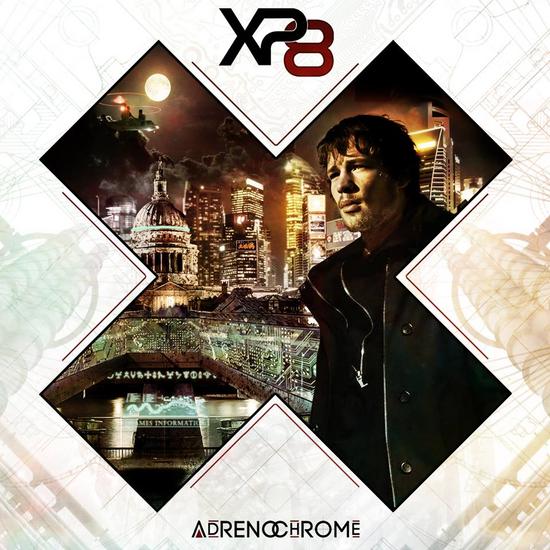 The least we can say about XP8 is that they got balls! Leaving DWA, working out a fundraising campaign for their new album AND raising the required money (pretty fast). Andrenochrome is more than just the music: it's a novel, based on a story written by Marko, in the late 1990’s and recently revised. The story is set in the not so distant future in a third recession London. The story revolves around two individuals, Liam Bateman and Kath Hastings. Liam is assisting Kath from being captured by various organizations for the information she carries. The story takes you through all the twists, turns, and deception they encounter. It's a tale full of intriguing characters with larger than life personalities. It's very cyberpunk in nature, calling upon all the classic themes of the genre while maintaining a distinct rivethead feel. With these characteristics, it's a captivating novel, which fans of sci-fi and suspense will surely embrase.

Every track on Adrenochrome is named after a chapter in the book and the music acts as the perfect accompaniment to the story. Apart from that, each of the songs can easily be played in a club, car, or your home, without the need of keeping the noval handy. So far the underlying concept of this great endevor! Push play and start to read...

'Awakenings' is the kind of song that gets you out of your bed and pumps you all up, ready to go and fill the dancefloor. I love the beats and the uptempo vibe. The vocals still remind me a bit of Apoptygma Berzerk, but i love it. Great sound!

'Camden Town' goes on with the same vibe, hitting the dancefloor! The little breakdowns are great and I love the whispering voice, before the game explodes. It has the same quality as what we can expect from our national radio and expensive studio recordings! Starting to love this novel, whilst listening to the second song over and over...

'Getaway' still resonates in my head, love the pumpin' beats, goes well with the short story. Could make it on the dancefloor too, hitting like a nuclear blast. It's well worked out with nice beats and a great voice. A warm welcome to clubland, again!

With a roaring sound from the get go, like a cyberbike getting started, nasty talk, nasty (computer)voice and some breakbeats, 'Information' is also part of clubland. XP8 really gets the party going.

'Night run' fits in very well with the story, it really feels like it should be... Love the dropping of bombs on the dancefloor and the warm sound which fills the air.

'Beyond the looking glass' takes of as a pure techno track, with a fat bass kicking in early in the track. The only thing that sounds a bit strange is the voice, luckily some angry sounds take over the voice, making it even more creepy. Some real harsh EBM emerge after a while, to slow down again and trow a new bomb, seems more and more like a technique.

'Going underground' cools the game a bit, sounding a bit like old school New Wave (almost like Gary Numan versus The Klinik). Love this track! After the whispering voice, some nice distant vocals are introduced.

'Hunters' is again an incoming bomb and the screaming in 'incoming, search and destroy', I simply adore.

'Hostage' feels like a bit of nostalgia, due to the voice (err sounds even a bit like Robert Smith from The Cure), love the pumping beats. well driven song.

'Showdown' starts like a hell of a Suicide Commando song, mixed with some great techno. This one will definitely make it on the dancefloor.

With 'Inside their heads', it's time to go back to the Apoptygma Berzerk kind of vocals, bringing a warmer sound, as if peace finally returns...

I must say I loved the novel in combination with the music. XP8 has done a great job, blowing us out of our socks! The sound and the production is just so professional! They have balls and they kick ass as never before!

review of their gig:

Next reviews
MONO NO AWARE • Tatemae
ZEBRA ISLAND • Saturnine
PARáRA •
WIELORYB • Namaste
GUIDO BELCANTO • Zo Goed Als Alleen
SONIC AREA • Music For Ghosts
SAVAGES • Review of the concert at the Botanique in Brussels on May 13th 2013
GEISTFORM • Data Transmission
CHELSEA WOLFE • Review of the concert at the Trix in Antwerp on May 6th, 2013
THE DEVIL & THE UNIVERSE • Evoking eternity ep