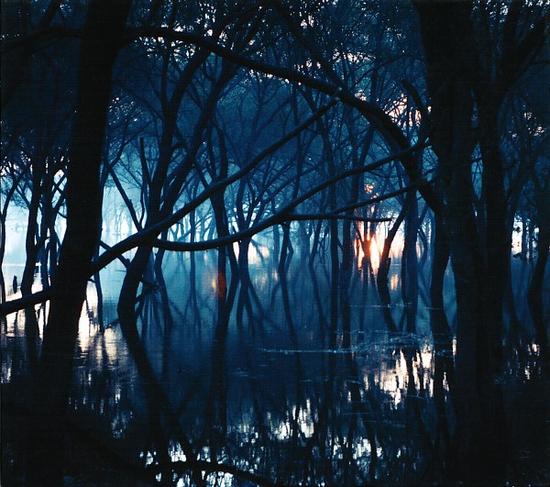 The guitarist of long gone metal band Disembodied, Mario Diaz de León started this solo project to explore electronic and guitar drones. The project got its name from a song on his first album 'Hypnos', an album that previously came out on the Shinkoyo label under his own name. Here he distills an album from ingredients like dark ambient, drone, metal, electronic music, noise and doom...

The interesting thing here are the distinct borders between electronics and guitar drones, in the song 'Katabasis' the first 3 minutes are primarily an electronic loop and then the guitars take over, like tsunamis of noise rolling over the artificial components, shattering them. With almost 15 minutes, it's an epic song! On 'Multitation' and 'Pathogen' there are more interactions between both sounds. The first being quite predictable but the latter is a lot more outrageous, I hope Mario continues in this direction!

'Gauze' is a two minute electronic intermezzo, on other albums it would get the stamp of being 'dark electro' but here it sounds like lighthearted music... On the last song his threatening voice adds another element of mayhem.

As you can hear, I do like this album. For most people the amount of ideas could be too much. But still it's very compelling and disruptive... if you can weather the ride that is, I double dare you!