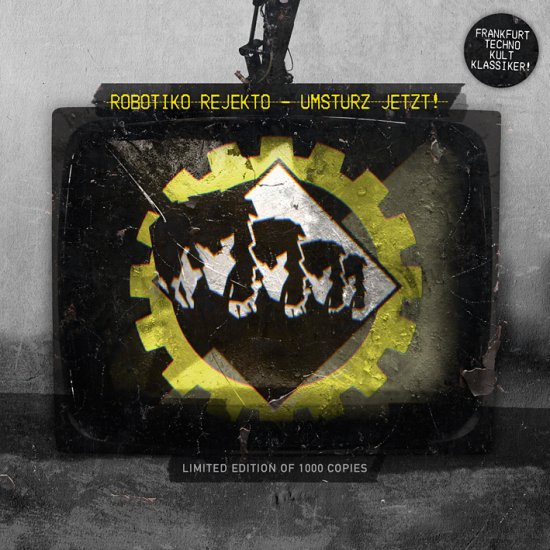 A label some of reviewers like a lot is the German-based Infacted Recordings. Apart from discovering the newest electronic talents, this label also reissues old pearls from the past that are almost impossible to find.

Indeed, not the kind of name that will be on someone's lips if he or she is not that deep in the electronic scene but this project got created by RaHen, also known as Ralf Heinrich.

This man is quite successful in the Frankfurt techno-scene and other projects from him are Moskwa Tv, Project One and Adoxry.

And if you really want a full biography, he also was producer from famous EBM-acts such Aircrash Bureau, Bigod 20 and Leaether Strip.

Anyway, under the Robotiko Rejecto-flag he made seven singles and one album ("The cyber space").

Ralf is the kind of man who likes to absorb lots of various synthetic sounds but generally speaking Robotiko Rejekto is the most EBM-oriented.

“Umsturz-Jetzt!” is not only concentrated on Ralf’s first three singles (“Umsturz”, “Rejekto” and “Confusion”) but this album is also a sort of pre-release to the band’s comeback.

People who are not keen on remixes will probably complain that from the 13 tracks featured on here, you only have three different tracks.
Those whoever who can’t get enough from this (I’m among them!) will certainly embrace this.

Just like all the Classics on Infacted, this one also is released on 1000 copies. Better be quick (providing you like it of course!)