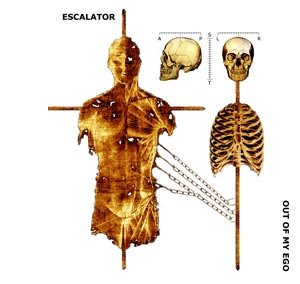 Out of my ego

There is also an EBM-scene in Hungary and one of the most successful bands coming from there in that genre is Escalator from Budapest. They started in 1988 and during 1989-1994 they delivered five albums on both Quint and Nagy Feró Produkció.

After the nineties, things got slowed down but this "Out of my ego" must cause the return of 2RT+tb (music and voice) and Igor 404 (live drums).

Eight songs might be quite short but almost every track is over the 5 minutes border and besides, we're getting bored from cd's that last 70 minutes which contains 30 minutes of good music.

Saying that every track's a winner would be a bit too much of a cliché but at least every song is different.

"Shut me off" is quite comparable with what Consolidated once did, "Rew Stop play" is without any doubt influenced by Front Line Assembly and closing song "Gépek Iesztek" could have come from Kraftwerk's "The man machine".

If this album will bring fame for Escalator is another thing but definitely one of the better electronic releases we heard these weeks!