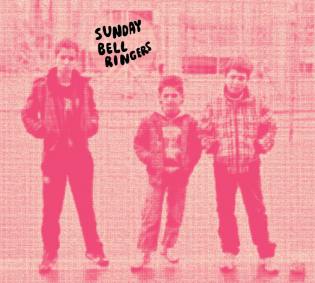 The fairy tale of Sunday Bell Ringers finds its roots in Belgium. The name might be inspired by some churchgoers, still the real reason behind this band's name is quite different. Behind this band you'll find the musical chameleon that Joeri Cnapelinckx is, and everyone who's familiar with that guy will know that he's the man behind Kawada, a band that were regular guests at Belgian venues.

Anyway, Kawada might sound cool in Belgium but if you use the modern technoogy of today (Google that is) you'll see that everyone in Japan is named Kawada and so it happens that the band were looking for some new name. No better moment to do so as this new album also is a sort of introduction to their new sound. The youngsters that grace this sleeve might let you think that those Ringers are some streetpunkband but hey!, they're not.

According to Joeri, their sound has an Icelandic feel and even if we cross our fingers when we hear that (just because there are too many copyists around), the Sunday Bell Ringers have done a fine job. The strength of this album lies in the fact that this band found a nice balance between classic post-rock and (shoegazy) guitarsounds. If this was British, we guess it would make the newest NME-cover but I guess, as they're not, that "a Belgian gem that has to be discovered"-description is their victory.

You'll know what to do!