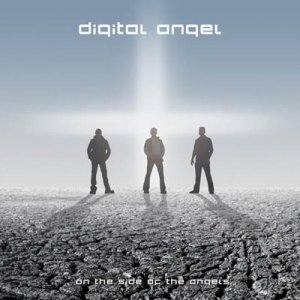 On The Side Of Angels

When a band claims to be influenced by Clan Of Xymox, you can be sure they're always welcome to knock at my door. Not that it's the first time that we're faced with a copycat, but somewhere it's always better to copy the best band in the world rather than be a shitty original band, not?

As this band is from Poland, we sadly have to admit that so far we're not able to read any Polish as this is the sole thing you'll find about them on the net. Anyway, no one cares how their bassist is called or in which studio they have recorded this album.

All you care about in the end is that the cd that's been plugged into your player will rock your world or not. And this Digital Angel does, at least if you're a lover of old-school gothrock. Don't get fooled by their band's name, as Digital Angel sounds like some Apoptygma Berzerk-clone, but they're not.

On this album, Digital Angel are offering you twelve solid gothrocksong (sung in English) that can be best described as a sound that captures Dreadful Shadows added with some Xymoxish keyboards. Nothing new, indeed, but thing is that by some records you absolutely don't want to hear anything new, just because the old sound speaks for itself.

A classic album, it ain't, but they use classic sounds and that is in 2012 more than a bonus. A tip for the gothrockers who like to have their songs wrapped in a melancholic suit.