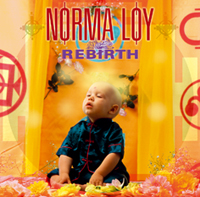 Norma Loy is a French coldwave band from Dijon formed in 1981. The name NORMA LOY is an anagram of “Nom Royal” (Royal Name) and was suggested by Alan Vega himself... After the re-release of the back catalogue CD's "Sacrifice" and "White Nights/White Beats", the band has remastered its fourth album, "Rebirth", which dates back from 1989. It includes the original tracks, plus the unreleased studio cover of "Cheerie Dream" (Suicide) and four live tracks. Again, we are impressed by NL's very original mix of rock, new-wave, and psychodelic, all this combined with artistic references to dadaism, buto, SM and a true punk attitude.

Most of the songs are shamanic celebrations of revolt and are reminiscent of Stooges, Velvet, Doors, Suicide, Virgin Prunes, Swans and Joy Division ("Nagashima", "Black Jesus", "We want (Eden 2)", "Californian spirits"), but with more maturity and serenity than in previous works. Cold wave is still present with the cover of "TV Eye" from the Stooges and the "Frustration" track. "To My Unborn Child" brings some peace and melancholy. "Rebirth" sounds like a savage ritual dedicated to the insanity of the modern world. Powerful!