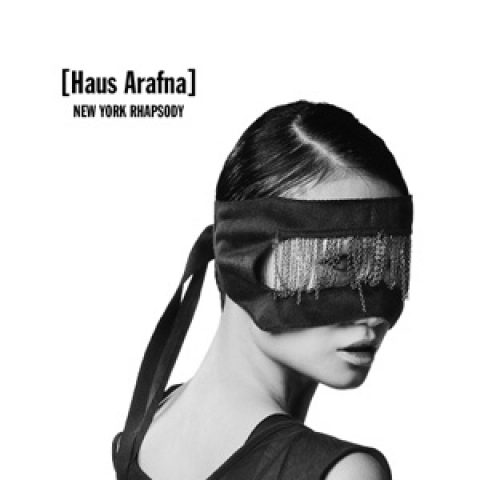 The German industrial band Haus Arafna is often described as one of the bands who are making the so called “Angstpop” genre. Since the early 90’s, Mr. and Mrs. Arafna indeed make the kind of pop which is both inspired by the dark industrial sounds from SPK and the minimal electro-clash pop from say, Chris & Cosey. Due to their high dose of originality, this duo gained much respect outside the scene, even in the fashion scene!

'New York Rhapsody‘ saw its premiere in 2009 at the New York Fashion Week. Fashion designer Katie Gallagher asked the band to compose music for her show. A more than unusual thing for an indusband and so it happens that “New York Rhapsody’ must be the most accessible Haus Arafna album you’ll ever come accross without forgetting their roots. Not that we ever will call this German duo pop, mind you!

The first three tracks contain the traditional Haus Arafna-elements: the sound of lashes, understated electronic beats, a threatening atmosphere, distorted voices and cries of despair and the kind of music that feels like you’re entering some slaughter house.

You know indeed what you’ll see won’t be the best thing the eyes will see but the perverse curiosity makes you enter the door.

Does it make sense to define their music as macabre dark pop? I guess so as “I Did It For You’ sounds like the ultimate love anthem penned by a serial killer and makes a song like “Kalt Im Bauch” have title perfection!

Those who are familiar with Haus Arafna know that their music is an unique experience where darkness and intelligence are converted to industrial music pieces for the outsiders of society.

Genius as always, not that we can imagine it being played on a catwalk and for the vinyl fans among you: this CD is also available on vinyl format with hand-numbered limited edition of 913 copies.