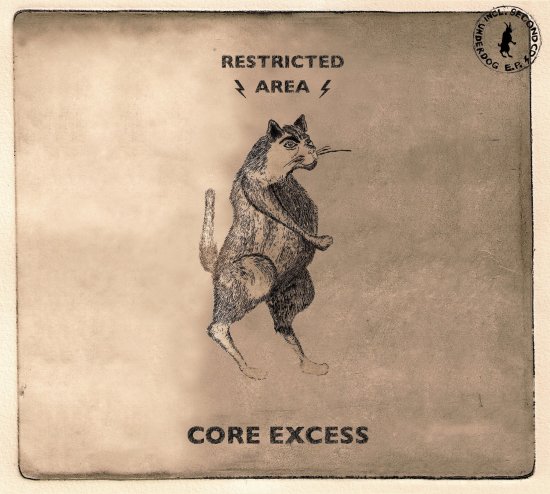 Restricted Area's first steps already date back to the mid 1990's, a time many still consider the heyday for Swedish synthpop and EBM. After 3 albums and a few singles, the last thing we heard was the 'Fun And Fearless' album in 2004.

Now after 7 years Peter Elm finally offers us a new album 'Core Excess'. 40 minutes that mix the best of the past elements of the Restricted Area sound without sounding dated, from melancholic sounds to stomping beats and back again. The strong 'Voyager' is a well selected opener, the lovely female vocals add, in great amounts, a pure pop touch before the stomping 'Too Much' shows more of the EBM side of the band. Via the atmospheric beauty of personal favourite 'Far Away' and the spooky 'Cercle' (sung in French) there is still room for more beats in 'Big Spender' and the experimental 'Treptow' before the synthpop ballad 'When It Comes' offers us an insight to those days were it all goes horribly wrong in life but one should still not loose hope. Another personal favourite on 'Core Excess'.

But this is not all, perhaps thanks to the large gap between releases, we get an additional EP that could stand as an album on its own. Here Peter Elm will surely please fans of old skool EBM, 30 minutes full of energy, classic basslines and drumbeats. For the fans who thought those elements featured a bit too little on the album, you get 10 tracks that will assure, you won't stay on the couch for 'Underdog'. Through nearly all the songs the main goal is the bassline, always prominent in the mix. 'D-Tox' reminds a bit of Front 242, where 'Steelbath' surely won't disappoint the fans of DAF. Surely more than just a nice gesture and bonus, other bands would have surely released these songs as an additional album, so you get 2 for the price of 1 here... Let's just hope the next album won't take such a long time and that this double-pack works as a kickstarter for a new chapter in Restriced Area's career.