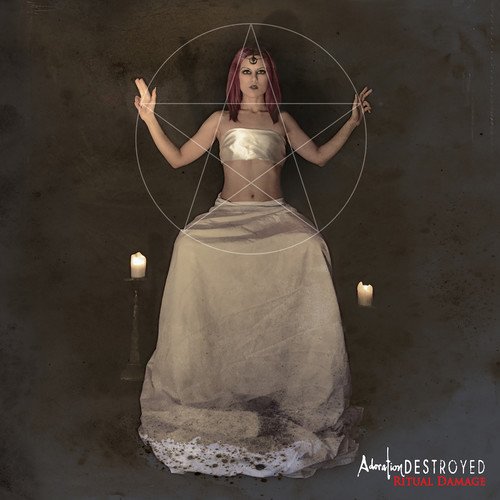 Austin based band Adoration Destroyd brings us their debut album Ritual Damage. It contains 13 songs, of which cover-versions of Til Tuesday's Voices Carry and mothers finest Marilyn Manson's Coma White along with a pair of exclusive remixes from 16 Volt and Mr. Kitty! So a debut album is something I am always looking forward to. Really 'virgin stuff'

The albums kicks off with Here To Bleed and we discover nice sounds. A steady beat, lovely basses, electro-elements and a pleasant voice. The band wants to warm us up I guess. They keep the heavy machinery for later on. Groovy guitars get involved in Torn Apart, while Voices Carry provides us with a more typical EBM-sound. Carnal Dirge, Last and Both Of Me sound a bit like this one: rather slow and dragging electro with monotone voices.

In Never Mine the role of the guitars is bigger. We also hear some EBM-influences, which makes this song even danceable.

And then the band hits us with a cover of Marylin Manson's Coma White. And in my humble opinion it's even better then the real thing.... Shoot me if I'm wrong....The nice people of Cynical Existence join the troops for Nothing Left. It is not surprising at all that the vocals are rougher and harder, which provides this song with an intens harsh-electro punch. In Elegant Decay the music is more uptempo, however the vocal part remains calm. This makes that overall, vocally it al sounds rather flat. A bit of a pity in my opinion.

Ritual Damage is instrumental. A nice combination of old school synths, nice melody and a rather militaristic drum section.The remixes of Here To Bleed by 16 Volt and In Elegant Decay by Mr. Kitty are nice and give this album a little extra.

Fans of bands like The Birthday Massacre, Aesthetic Perfection, Marilyn Manson, Assemblage 23 and Nine Inch Nails will like this debut album of Adoration Destroyd. A nice mix of electro, some guitars, synthpop and EBM. A mix of some slower and some more uptempo songs, produced to perfection, sounding superb when played at high volume.