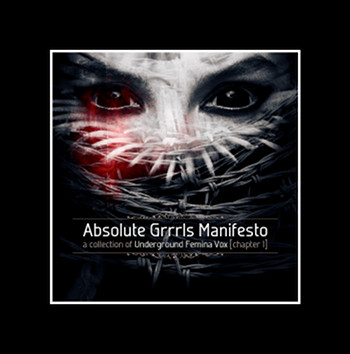 Séba Dolimont (Alfa Matrix) did a great job with this compilation & I have no clue how he could do it! 111 bands in this first compilation and of course: only women are aloud behind the micro. It's indeed the ultimate anthology of female fronted bands from the alternative / underground music scene and its various subgenres (gothic metal, new wave, industrial, pop rock, electro, synth pop, EBM, techno...).

This 4CD-collection (plus a 40-song additional soundcard) is presented in a deluxe carton box with an extensive 32-page booklet featuring the splendid design of Oliver Haecker (bastart-worx.de) with photos from all featured bands and an essay about the place of women in the music industry. After listening to the four cd's I can only conclude that it was time somebody did this! A great idea and well worked out! I think everybody can find his taste in here and even discover some new ones and having a bite of some unknown stuff.

I get some personal highlights for you in a random order: Liv Kristine & Leaves eyes (always been a fan and Move to France really is a good rework on the state of art that I call original), Dark Orange (a nice discovery for me), Arcana Obscura (yes some good medieval stuff), Tristania, Chandeen, Canal pop feat Polette, Chamber of Echoes (love the cool poppy sound), Chaos All Stars (love the song 'We are The sinners'), L'Ame Immortelle, Isis Signum feat. Sara Noxx, Alice In Videoland (oh so aggressive and brutal), The Lovecrave, God's Bow (what are they doing nowadays?), Implant, Grendel, Aiboforcen, Javelynn (Wannabe really is a funky, catchy, poppy and happy song),Psy'Aviah, Unter Null, Neikka RPM, Patenbrigade Wollf feat. Antje Dieckman, Uberbyte (so gross, but great techno), The Dreamside, Cinderfall, Datasushi, Lovelorn Dolls, Helalyn Flowers, Xandria (real heaven for metal fans), Aaimon (nicely in a soft way, sounds so heavenly), AD:KEY (reminds me of And One),...

I can't say it enough: great work Séba & co! This is indeed a must have!