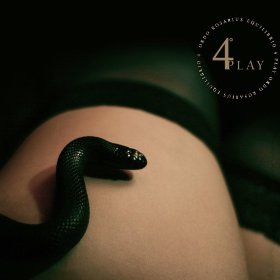 Not everyone was that convinced when Ordo Rosarius Equilibrio signed to Out Of Line. The truth is that their latest album Songs 4 Hate And Devotion is undoubtly their most poppy one, but at the same time it’s also their best one.

Three years later Tomas Petterson delivers us 4Play, an EP with four songs which is a teaser for the forthcoming album. And really, our fave Swedish band couldn’t choose a better title as this is indeed a delicious foreplay. The four anthems that are featured on this EP could easily have landed on their previous longplayer and that’s a good thing, because if there is one band around who can make poppy tunes out of tribal music then it must be Ordo Rosarius Equilibrio. Of course every song has as usual a oneliner that you’ll forever remember ("Every man is the star that will burn" for instance).

The gracious violin you’ll hear on the tracks are performed by Matt Howden from Sieben and this is another enrichment for a band that reaches perfectness.

Four little masterpieces that make us ache for another beautiful gem that is awaiting us, and according to this EP the new Ordo Rosarius Equilibrio will blow us (once again) away. Genius.