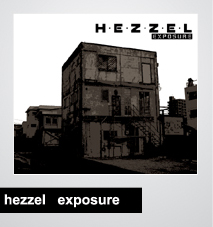 ‘Hezzel’, is an industrial ambient project, formed in Riga, Latvia. This project was started in 2008 and features a mixture of various elements of hardcore electronics and music between melodic passages to danceable beats.

‘Exposure’ is the debut album, and it surprisingly strong. Hezzel has joined the ‘Hands Label’ with a reference of several net releases, including a split album with the band ‘Tatlum’. When listening to these new 15 tracks, you can never pin down Hezzel to a certain musical style. Sometimes you hear the influence of bands like ‘Aphex Twin’, but he brings lots of styles together, acid influences, heavy distorted beats, rhythm ‘ n’ noise, yes even captivating melodies , that you can even call IDM. A good part of this album is about war, nuclear warfare specifically. A beatless track like ‘Second Chance’ is an example of it. But Hezzel never forgets the little twists and turns to keep his tracks dynamic and compelling. Melodic backdrops, effective breaks, and the occasional sample, even potential dance floor killers like ‘Cannot See’ are on this great debut album.