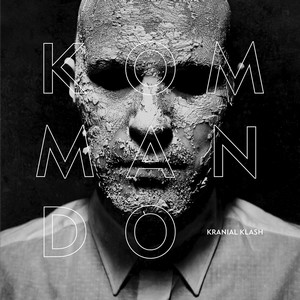 KOMMANDO was Dan Courtman’s pre-Thorofon project, but comes to live again after four years. With “Kranial Klash” Dan returns to the heavy music we like to hear from an act like IRM. Impressively heavy noise with distorted voices. As listener you’ll need the right mood to listen to this, because otherwise it’s very exhausting. It seems that KOMMANDO knows this as well, because after three songs of heaviness (‘Corpses In Gasoline’, ‘Afron Plans’ and ‘Metal Teeth’) the mood changes. The more break-beat oriented ‘Liquid Sky’ is the first step. The noise of ‘Saint’s Heaven’ and ‘Cutting In Flesh’ however returns to the first part of this album. Although ‘Crocodile’ got the same elements the repetitive character and the attempt to almost danceable beats works wonderfully well. It’s by far the best song of this album. “Kranial Klash” is for the ‘happy few’. People who really love the dark, distorted world of noise should give this album a chance. It’s not the most inventive album in this genre, but it sounds heavy enough to impress the neighbours.