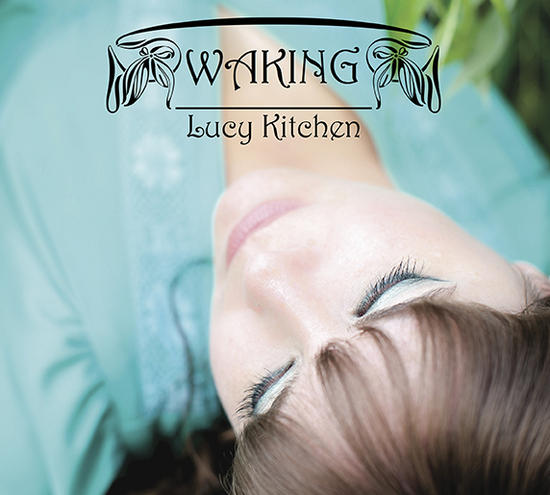 From the opening picked guitar of title track ‘Waking’ (literally written in that time between sleep and waking, "when I opened my eyes, it was there" she says), to the country-tinged love song ‘Here’, through ‘Autumn’ (a lament for summer), ‘Blue Eyes' with its lush cello to the laid back, string soaked ‘Tide’, this is an album to close your eyes to and just take it in. The songs were recorded as a live performance of guitar and vocals and then embellished with flute, glockenspiel and other instruments. Kitchen says "I wanted the intimacy of a live performance and to capture the songs as a whole." Recorded with her good friend Toby Vane of Zanzibar Productions, Kitchen plays and sings guitar, flute, glockenspiel, melodica and percussion. Lucy Kitchen is a Southampton based singer-songwriter, a self-confessed ‘folky bird’ who cites influences from the likes of Joni Mitchell, Mazzy Star, Laura Veirs, Bon Iver, Neil Young and Nick Drake.

Or to say it in my words: Lucy Kitchen brings great accoustic guitar minded folk, like a well talented singer-songwriter! The songs are very fragile, giving you goose bumps, asking for tears and true emotions! 10 Jewels, but already ending after 37.52! I really loved it and was each time left behind with the same feeling: too short for such a beauty, where is the repeat buttom?!

On the other hand, it might just be too boring for people who don't like soft songs that are so pure, but i'm a man of emotions and that is what I felt whilst listening to this jewel, so heads up, thumbs up and next time a longer record!

Blue Eyes is a gorgeous introduction to the sensual album from this talented new artist.