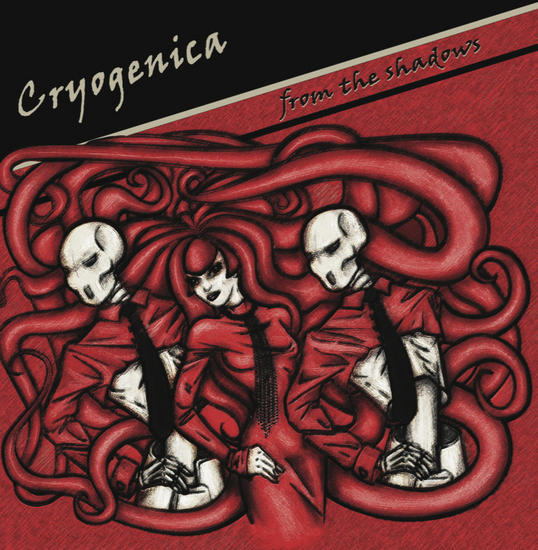 Cryogenica (= relating to ice cold temperatures) is a London based band. It achieved a certain status in the UK. With their third album From The Shadows, they hope to cross the Channel and make their name on the continent. The band states Siouxsie And The Banshees, Nine Inch Nails and Killing Joke as its main influences. This album was even mastered by Reza Udhin, who plays keyboards in Killing Joke. So you can expect a mixture of gothic and mainly industrial rock, topped with a layer of electronics.

The album opens with Together. Filthy guitars combined with haunting synth overtones. The melodic chorus easily gets you hooked. Throughout the album (check Something said, Intrusion, To the sky) Cryogenica proves its ability to create memorable melodic choruses. Lord of the flies is another noteworthy track. It is nicely constructed with heavy distorted guitars alternating with psychedelic parts. Whispering male vocals add extra atmosphere.

My personal favourite is The Preacher. A rather gothic rock orientated track with clean guitars and more prominent electronics. I love the mesmerizing vocals. The album ends with the slower and atmospheric The Choice.

Carina Winstone’s versatile and seductive vocals is Cryogenica’s most effective weapon. Sometimes her style reminds me of Siouxsie Sioux, other times Monica Richards comes to mind. Although the album is quite varied, with haunted, psychedelic, atmospheric, delicate, pounding and crushing passages, some tracks sound slightly monotonous. Maybe this album could use a more polished sound. Occasionally nice electronic fragments come through, but it is a pity that they seem to be of secondary importance, limited to intros and outros. During the tracks, the electronics are dominated by the distorted guitars.