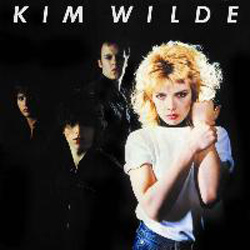 Kim Wilde? Yes, Kim Wilde! Of course she was the hottest blonde of the 80s (sorry, Sharon Stone!), but she also made some genius stuff that is often forgotten. And besides, can you imagine the 80s without her? No, you easily can skip Glenn Medeiros, but not the daughter of 50's rocker Marty Wilde, who made all boys’ hearts go mad.

Her debut (that was later reissued on Cherry Red, but originally available on RAK) was a complete family affair. All tracks were written by her father and brother Ricky, who also produced the album.

It’s hard to categorize Kim Wilde. You can say she’s a British version of Debbie Harry, but in the end Kim is just Kim. The album was of course a bestseller because of Kids In America (an excellent song that is just too much played on the radio), but it’s more than that!

I remember that as a kid, apart from staring at the cover, I kept on playing the B-side from her N°1 hit. Tuning in Tuning On was indeed something completely different, a touch of new wave, even a bit industrial! The second single Chequered Love had the same Joan Jett rock sound as Kids In America had, but the other songs were a complete different matter!

Water On Glass almost sound like XTC (the band, not the drug) with sex, Our Town like a Marlon Brando rebel song (again with sex, but the whole album just sounds sexy!) and You’ll Never Be So Wrong probably the best 80’s pop tune that is never played. And yes, I admit, 2-6-5-8-0 is pure crap. If you find this at some flea market (and you will!), buy and rediscover Kim’s beauty. That also includes her music!