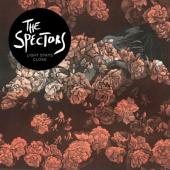 Call me old fashioned or whatever, but I respect some rules, and one them is that a pop song has to be short and catchy. It is the goal of a pop song that it slips through your head, but if it has a fine chorus, it will stick there. Some will agree, others will disagree, but the best pop tunes in history were made like that, and that is why they are immortal. And it seems like The Spectors (not very difficult to guess who they are named after) have understood this rule, as they come up with ten such songs on their debut album Light Stays Close.

They were the support for My Bloody Valentine, and their EP was produced by Chris Urbanowicz, (yes, the Editors-guy!), and so it is easy to categorize them as postpunk-indie. They probably are, but the band that is formed around Marieke Hutsebaut (the band’s bass-player and songwriter) also adds a shoegaze touch, a C86-Primitives sound and a loveable 60’s feel to the songs, without forgetting that the calendar indicates 2015. You can start namedropping and citing bands like Lush or The Ronettes, and even if we are sure that you can find those records in their collection, The Spectors have found a personal sound. Before the release of their album, those youngsters were already included on lots of festivals and judging by the quality of Light Stays Close, that will be the case for many years. Belgium has another indieband to be proud of. Their name: The Spectors. Their name is not difficult to remember, and once you hear their sexy, irresistible shoegaze indie noise pop, you won’t anyway. Tip.