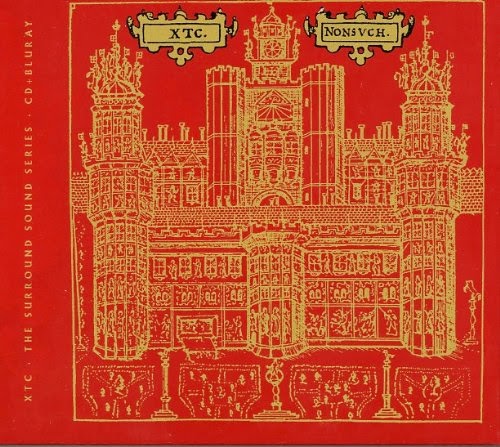 The last time I wrote a review for a new XTC album was in 1992, ironically for this very album's initial release on Virgin. The fanzine I scribbled it for never took off, a bit like the commercial success for what was XTC's final album for a label that had been, by turns throughout the previous 15 years, both a blessing and a curse to Messrs Partridge, Moulding and Gregory. You'll get to know a little bit about the creators behind this adventurous double-album by studying the fascinating sleeve-notes in the booklet - and by listening to this refreshed edition of what has slowly become an important album in the Swindon trio's bewilderingly wonderful canon.

But first the music. With the possible exception of 'The Big Express', time has always been kind to XTC's work and 'Nonsuch' is no exception. Pleasingly, it benefits from being respectfully remixed by Porcupine Tree's Steven Wilson, overseen by Partridge's watchful eye and approved by the band. Rather than update, the onus here was to breath life into the original master-tapes, as well as present surround-sound, stereo and hi-res instrumental versions across a CD plus either a Blu-Ray or DVD-a format. I went for the former since a Blu-Ray player is on the shopping list (well, it has been for a few yrs now - maybe this is the spark needed to ignite the fires of purchasing desire).

The big, bold, brazen songs on 'Nonsuch' unsurprisingly come from the pen of Partridge - 'The Ballad Of Peter Pumpkinhead', 'That Wave', 'Omnibus' and 'Dear Madam Barnum' all bounce and pound their way around the playground, while mate Moulding prefers to silently stew by the sidelines with deft sardonic lyricism and a seemingly easy-going shrug of the songsmith's shoulders. Like a man biding his time, 'My Bird Performs', 'The Smartest Monkeys' and 'War Dance' are the equal of any Moulding creation, crafted out of a love of observation or candid commentary and yet all paling into insignificance when it comes to another Colin concoction included here - 'Bungalow'. Sweetly sung, melancholic, sad, hopeful, even a little unfashionable like its subject, 'Bungalow' is just simply wonderful. Peter Skellern on a wind-swept cliff, gazing out to sea through the windows of a tired '60s hotel-lounge, mirrorball no longer turning, the mist drifting by, along with the years. Sorry, I lost myself there..... anyway, he should get a BAFTA for it, Partridge an Oscar and Gregory a Grammy.

But it isn't just the bassist with the gentle touch - Andy Partridge also has a knack for writing the dextrous, the under-rated, the under-stated, the disappointed. 'Humble Daisy' recalls Mummer's 'Ladybird' and the hit 'Senses Working Overtime' with its celebratory overtones, giving nature props for just being, well, nature. 'Wrapped In Grey' and sweetener single 'The Disappointed' also ably demonstrate the guitarist's penchant for strings (and pal Stuart Gordon's ability to arrange them) and Bardsmanlike poetry.

Bonuses across the package include Moulding's 'Didn't Hurt A Bit', 31 home demos, a few of which are entirely unreleased (i.e. haven't seen the light of day on Partridge's 'Fuzzy Warbles' series) including the hard-to-find 'Rip Van Reuben', which has only previously been 'released' on the 'unreleased' third single 'Wrapped In Grey' that now fetches a price-tag of £300+ and a welter of footage shot during the making of the album. Oh and two promo videos for 'Pumpkinhead' and 'Disappointed'.

All-in-all, your money is well-spent - there's love shared in them thar Ape-like hills and the new mixes are spatial and warm, the booklet informative and interesting, the packaging well thought out and 'Nonsuch' still sounds as much of a curiosity shop as it did just over two decades ago. And it pisses all over the Virgin reissue ten years ago. And isn't that the whole point? Here's to the next release in the series.