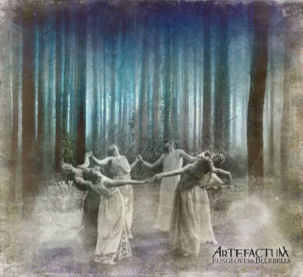 Everything starts with this cover. You see a picture of 6 women who are holding each other’s hand and dancing in a forest. Are they worshipping something or someone? Is it good or is it just evil, or is it the sound of witches?

That experience represents itself in the music too as this is the kind of music that feels like a spell.

In Artefactum’s music everything is used, be it ritual bells or sensual vocals. You name it, as long as it has a mystical sound.

Artefactum is the musical outlet of Merissa d'Erlette whose latest work, "Rosarium Hermeticum", was released in 2005.

But it seems Merissa still knows how to come up with mystic sounds that grab you by the throat.

Do also note that on this album you get guest appearances from neo-medieval The Soil Bleeds Black, British folk singer Andrew King and Dawn & Dusk Entwined, "Foxgloves & Bluebells".

This release is a must for music fans who adore dark folk.

Released by Old Europa Cafe and Ur Muzik as a 6 pannel digipack.