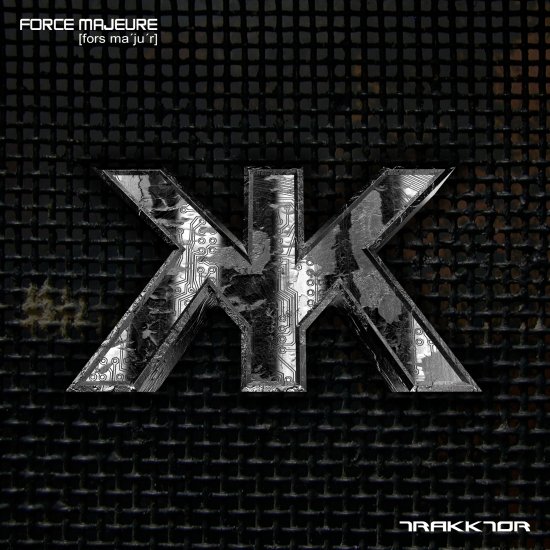 It’s not such a hot summer after all, so we can definitely make room for some more cold beats, and the latest album by the duo Trakktor turns up from Sweden.

This band was fronted in 2001 by Pierre Maier and Tobias Jansson, and they shared stages with the likes of Combichrist, Front 242 , Suicide Commando , Clan Of Xymox and Mesh. This led of course to a growing fanbase and “Force Majeure” is the cherry on the cake. The result of people believing in themselves.

When you hear this album, it’s not that difficult to find out to which bands Pierre and Tobias have been listening to but this nevertheless delivers one of the strongest EBM-albums of the moment.

Is it an EBM-album? Not really as “Force Majeure” is very diverse in which it seems like the duo want to explore different layers of the genre.

“Soothsayer” for example is a fine aggrotech-song that reminds us of (who else?) Johan Van Roy and that’s not only said because it refers to horror movies where the cry for help is a primal ingredient.

“Final fusion” is danceable electroharsh that sounds like a classic once you play it three times in a row, whereas “Reaper” is inspired by the Canadian school, all this added with some Eurobeats.

That can be said about “Extinction” as well, which could have ended up on a recent Front Line Assembly-album.

Sweetest surprise was “Thirteenth order”. With sounds like (ahum) Jean-Michel Jarre but then again those Swedish boys see him as an inspiration as well, so we can't be that far from the truth after all.

People who like to listen to powerful electrobeats will definitely love this release and it’s recommended from the heart. Let the beats rule the body!