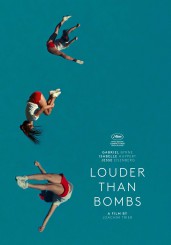 Anyone who saw Reprise and Oslo, 31 August, instantly knew that the Norwegian Joachim Trier is a filmmaker to keep an eye on. Louder Than Bombs is his English-language film debut and the director could appeal to big names like Isabelle Huppert, Gabriel Byrne and Jesse Eisenberg.

Huppert plays the role of a war photographer who is always looking for the right shot. She barely has time for her family, and when she is killed in a tragic car accident, she leaves a strange gap. Both the husband and two sons search for the truth and handle that in their own way.

Louder Than Bombs is a film that deals with serious stuff, but Trier never makes it difficult.The emotions are quite heavy, but the Norwegian shows them in a lighthearted way and some scenes are even hilarious (even though it remains black sarcasm).

Not only Trier is doing very well, the cast does a fantastic job too. As the widowed father, Gabriel Byrne shows that he is still a brilliant actor, Devin Druid is a splendid newcomer, Eisenberg s fantastic as always and Huppert proves once again that she belongs to the top. One of the essential films of 2015.