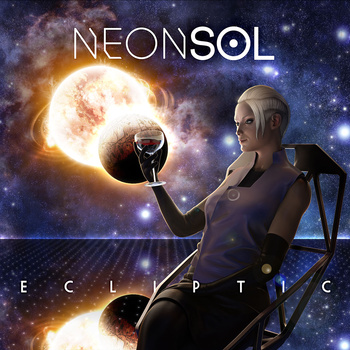 I never thought I would ask this question, but is there a future for futurepop? Well, bollocks to those who invented that term once as we all know it was all about stylish synthpop with some Eurobeats and catchy choruses. With that, I guess I have perfectly described the sound of this Danish/Canadian project who did very well in the German alternative charts with their debut single Citadel.

A year later Nina Io, Jesper Io and Frédéric Scarfone come up with their debut album Ecliptic containing ten tracks, well that’s twelve if you also include two remixes by Iszoloscope and Leaether Strip. It’s not that easy to describe their sound but the dark vocals from Nina Io reminded me a bit of Liv Kristine. It’s poppy, but not in the traditional way of being poppy. The synths are danceable, melodic but harsh too. So it’s good for both the alternative dance floor or your living room, at least if you love female vocals with synth beats. But then again, who doesn’t?

Ecliptic is released via AnalogueTrash Records.