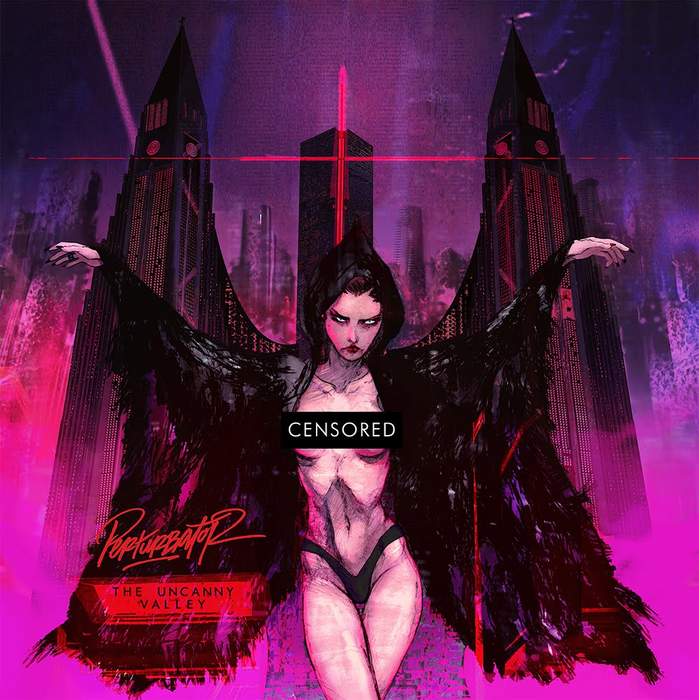 The horror and manga inspired album art drew my attention. The cover of The Uncanny Valley reminds me of an 80’s metal cover. Turns out that James Kent, the French retrosynth wizard behind Perturbator, has a past as a black metal guitarist.

Unlike Paranormalizer, another album from a former extreme metal musician I reviewed recently, you can hear a link with metal music in The Uncanny Valley. Listen to the aggressive percussion in opening track Neo-Tokyo for instance.

Throughout The Uncunny Valley you hear dark ominous synths. Perurbator makes an uplifting mixture of synthwave and industrial. Multi-layered mostly instrumental music that occasionally sounds harsh with its droning basses and invasive percussion. Topped with haunting soundscapes, hints of arcade game music and a sci-fi soundtrack, you get a magnetic mixture. Sometimes it sounds like a hellectro band playing Blade Runner. Or should I say Tron Legacy? Because Perturbator sounds contemporary as well.

The Uncanny Valley is an interesting album. Due its complexity, it isn't always the most accessible, but do not let this stop you: visit the Bandcamp page and give this project with its often hypnotic music a chance.