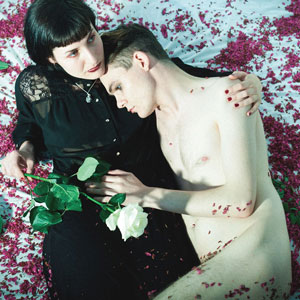 They will never go away, those post-punk bands who believe that Seventeen Seconds by The Cure was the best album ever. Somewhere I always wanted this dream come true for Belgian band Thieves Of Silence (they deserve it!), but it seems this crown is now in the hands of Lebanon Hanover.

Tomb For Two is already their third album and it’s probably the most mature album they made so far. Just like say Editors they take their roots from the 80’s, but somewhere it feels like they put more emotion in their stuff. I mean, songs like Gallow Dance, Midnight Creature or Stahlwerk (that title alone!) really sounds dark. This is not the work from a band who’s dreaming of big scenes. They don’t want to be the next U2, they’re the kind of band who transform their sadness in music. Just like The Exploding Boy or She Past Away, Lebanon Hanover are able to deliver timeless classics.

It are maybe big words, but Tomb For Two might be classified next to your albums by The Danse Society, The Chameleons or even Joy Division. Why? Just because I know you’ll listen to it till the end of your days. Tomb For Two is probably one of those highlights of 2013, if not THE highlight!