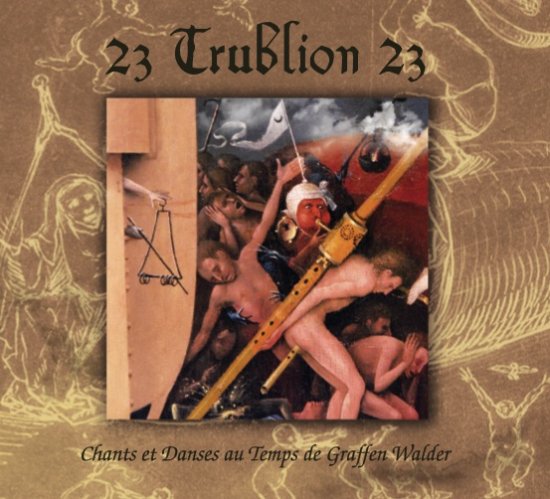 23 Trublion 23 is the brainchild of the Gaë Bolg drummer, who are best known for their so called cinematographic neofolk genre.
In this project he teams up with a whole bunch of musicians to enter the world of Graffen Walder.
These imaginary people do live in the mind of Gaë and on their previous album "Honour et Gloria: La Geste La Graffen Walder" we witnessed how their village was destroyed by lots of hostile nations.
On this third album the history goes on, all of which you can read (and hear) about in the corresponding 8 page booklet.
The kind of stuff from people who are out of their minds?
Wait till you hear the music as this is probably the most extreme form folkmusic can have.
Luckily for us we have the inclusion of the musical term "unclassifiable" as 23 Trublion 23 are making the weirdest music you can think of.
If you ever force us to do so, then we're thinking about the 70's offerings from the prog label Charisma that featured old Gensesis records, as that will be the sole option.
Unless you go for their own "hippie industrial red folk" or "Boucan medieval" description, that is.
Described as a melting pot from Merzbow, Monty Phyton (yes!), Scott Walker and Rabelais you know what to expect: just the unexpectable.
The kind of record from people who are totally out of this world and they even managed to deliver us an (almost) genius record!