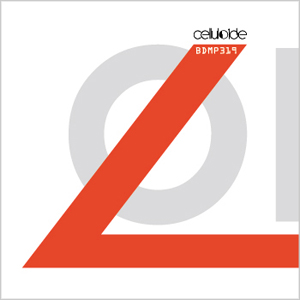 With their latest release Celluloide opt for the Indochine-way, 'Ordinosaure' had been released as b-side (bonus track that is these days) of their 'Imprevisible' release earlier this year. I don't know if it will be a similar success as 'J'ai Demandé À La Lune' (that was first released as b-side of 'Punker'), but surely this track deserves a bigger attention.

The tune itself is pretty unusual for the band, almost instrumental and as you can guess from the name, a tribute to the very early computer days, a time were you stored information on magnetic tapes and professional computersystems blocked the whole room. Luckily the way the song is constructed you don't miss the lovely synth sounds the band comes up with.

Celluloide are well presented as remixers on various releases, so it shouldn't have been too hard for them to come up with a selection. Besides bandmember u-0176, fellow labelmates Dekad, Foretaste and Neutral Lies all got their hands on 'Ordinosaure' and offer quality remixes, with all of them more to be seen as alternative versions rather than total deconstructions, which is definitely prefered by myself.