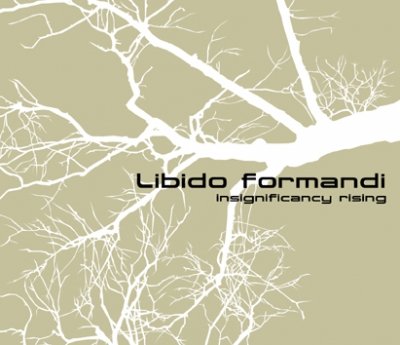 Don't try to find anything on this Libido Formandi on the net as you won't.
All we know is that this is a project formed by a certain ManosX, a Greek who's also involved in a band named Last Days Of S.E.X.
As told by collegue Chris they were also featured on the most recent Form Of Hands compilation but with this "Insignificancy Rising" we got their first album (at least we think) that’s been released on Hands.
The best moments are the first seconds, as opening song "Other" is characterized by a deafening attack of sharp indus sounds but it soon changes into tribal percussions and dark ambient sounds that are a bit too mellow with "Unknown" being the nadir of this album.
The predominant feeling you get here is that you're listening to an unstructured album where different genres run in each others way.
Well, let us not be so judgmental as "Insignificancy Rising" has its fine moments but we just couldn't escape the feeling that Manos takes a bit too much on the chew to make this release an outstanding one, whereas the tradition taught us that this is normally the case with Hands.
Average but in their terms that's still good.