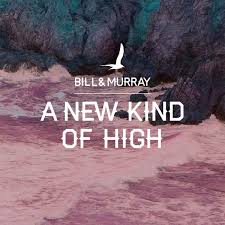 A New Kind Of High

Bill and Murray hail from Tel Aviv. If you didn’t guess from the ironic name they are a female fronted trio of hipsters complete with funny mustaches and beards. Thet play dreamy electronia drawing from New Wave, Indie and Synth Pop genres.

Songs like Bored put me in mind of misspent youth at the front row of Elastica concert. However while the girl I spilt my beer on at the Elastica concert and later ended up kissing forgave me, I imagine she probably wouldn’t have if it been a scalding cup of coffee at a hipster café.

The darker Synth numbers like Something to Fear play like Gary Numan (who the band supported in Toronto) and is a mauldling number about failing to act in time to support someone being oppressed for their beliefs. Obviously the hipster mustache police are particularly harsh in Isreal.

Sweet Sensation is the highlight of the album for me, a dreamy electro pop number about the expectation of a lovers embrace complete with a video shot at a wedding.

There were times when I wanted the band to play a little harder or at least mix up the soft dreamy atmosphere they create, but overall this is a good first release. Wait if I say I like a hipster album does that make me one?